Vélib’ (French: vélo libre or vélo liberté, English: free bicycle or bicycle freedom) is a public bicycle rental programme in Paris, France. The initiative was pushed by Paris mayor Bertrand Delanoë from the French Socialist Party. The system was launched on 15 July 2007, following Lyon's Vélo'v success and the 1974 pioneering scheme in La Rochelle. Ten thousand bicycles were introduced to the city with 750 automated rental stations each with fifteen or more bikes/spaces. This number has since grown to 20,000 bicycles and 1,450 stations, roughly one station every 300 metres throughout the city centre, making Vélib’ the largest system of its kind in the world. 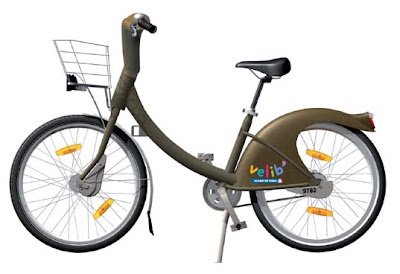 ... this latest French utopia has met a prosaic reality: Many of the custom-made bikes, which cost $3,500 each, are showing up on black markets in eastern Europe and northern Africa. Many others are being spirited away for urban joy rides, then ditched by roadsides, their wheels bent and tires stripped.

With 80 percent of the initial 20,600 bicycles stolen or damaged, the program’s organizers have had to hire several hundred people just to fix them. And along with the dent in the city-subsidized budget has been a blow to the Parisian psyche.

“The symbol of a fixed-up, eco-friendly city has become a new source for criminality,” Le Monde mourned in an editorial over the summer. "Vélib’ was aimed at civilizing city travel. It has increased incivilities.”

... “We miscalculated the damage and the theft,” said Albert Asséraf, director of strategy, research and marketing at JCDecaux, the outdoor-advertising company that is a major funder and organizer of the project. “But we had no reference point in the world for this kind of initiative.”

At least 8,000 bikes have been stolen and 8,000 damaged so badly that they had to be replaced — nearly 80 percent of the initial stock, Mr. Asséraf said.

JCDecaux must repair some 1,500 bicycles a day, which absorbs the efforts of 400 fulltime staff members.

The company maintains 10 repair shops and a workshop on a boat that moves up and down the Seine.

... despite the increasing costs, the city and JCDecaux are pressing on.

The company invested about $140 million to set up the Vélib’ system and provides a yearly fee of about $5.5 million to Paris, which also receives rental fees for the bikes.

In return, its 10-year contract allows it to put up 1,628 billboards that it can rent.

JCDecaux will not discuss money figures, but the expected date for profitability has been set back.

But the City of Paris has agreed to pay JCDecaux about $600 for each stolen or irreparably damaged bike if the number exceeds 4 percent of the fleet, which it clearly does.

In an unsuccessful effort to stop vandalism, Paris launched an ad campaign this summer. Posters showed a cartoon Vélib’ being roughed up by a thug. The caption read: “It’s easy to beat up a Vélib’, it can’t defend itself. Vélib’ belongs to you, protect it!”

Socialism fails every time... and the socialists just press on spending the public's hard-earned money on the idiotic utopianist schemes...

Everybody would be better off if they paid for and took care of THEIR OWN bicycles or THEIR OWN personal transportation device - whatever it is, CAR, BIKE, SCOOTER, MOTORCYCLE WHATEVER!
Posted by Reliapundit at 6:17 PM