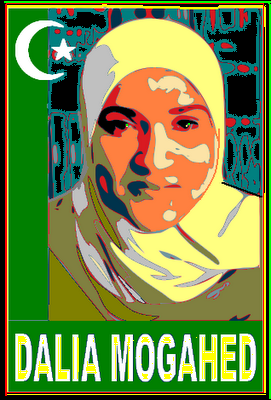 "I don't regret anything I said," she said. "My regret is that I went on the show."

President Barack Obama's adviser on Muslim affairs, Dalia Mogahed, has provoked controversy by appearing on a British television show hosted by a member of an extremist group to talk about Sharia Law. Miss Mogahed, appointed to the President's Council on Faith-Based and Neighbourhood Partnerships, said the Western view of Sharia was "oversimplified" and the majority of women around the world associate it with "gender justice".

SO... IT WASN'T JUST THAT SHE APPEARED ON A TV SHOW WITH A TERRORIST, IT'S WHAT SHE SAID THAT MAKES HER UNACCEPTABLE AS AN ADVISOR TO THE POTUS.