The New York Times reports that on Friday, DOJ released "hundreds of pages of partially declassified documents" on the interrogations. Ostensibly, they were released pursuant to Freedom of Information Act demands by the ACLU and Judicial Watch. But as I've noted before, there are FOIA provisions the administration could use to withhold this information — Obama is releasing this material because he wants to, not because he has to.

The Justice Department's actions are consistent with the theory I've previously offered that the Obama administration is intentionally feeding left-wing lawyers who are trying to persuade foreign courts to prosecute Bush administration officials for actions taken in defense of the United States. 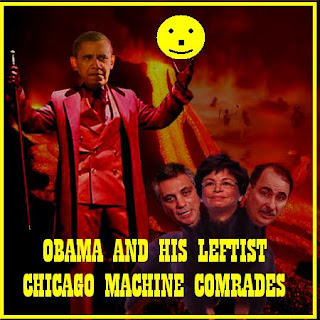 Everything Obama and his comrades do is by stealth because they know the vast majority of Americans would reject their goals.


Obamacare and Cap & Trade are Trojan Horses for socialism.


Obama is a snake and a liar and a postmodern left-wing anti-West collectivist.


Emphasis on the snake - a slithering dithering snake.
Posted by Reliapundit at 10:48 AM