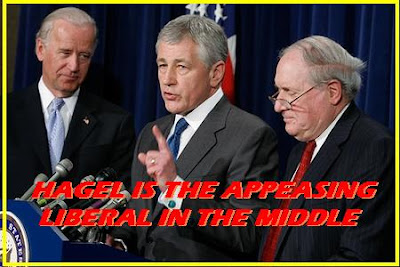 Chuck Hagel's troubling record on critical foreign policy issues makes this appointment a matter for serious concern. There has been bipartisan criticism of his positions on Israel and the Israeli-Palestinian conflict and his record on Iran has been very worrisome as well.

A review of Hagel's record over the years on these issues reveals a fundamental misunderstanding of the region and of the nature of the threats to U.S. interests in the region.

...Hagel's record on Iran shows that he has a similar blind spot regarding the threat from that country. In October 2008, he prevented action on a Senate bill - sponsored by then-Sen. Barack Obama - proposing economic sanctions against Iran. Hagel has argued that, "Whether we like it or not, there will be no peace or stability in the Middle East without Iran's participation," but he has opposed the kind of U.S. pressure on Iran that might prevent a nuclear Iran from being the greatest threat to regional peace and stability. (5)

Chuck Hagel has a distorted view of Israel, of Iran, and of the threats to U.S. interests in the Middle East. Placing him in a sensitive role in the intelligence community, where he will advise the President on the effectiveness of intelligence community assessments of global issues, is very troubling.

SADLY: HAGEL BELONGS IN THIS ADMINISTRATION: APPEASING, ANTI-ZIONIST ISOLATIONIST BIRDS OF A FEATHER...
Posted by Reliapundit at 5:38 PM