COMMENTING ON THE OBAMACARE HEARINGS

COMMENTING ON THE NYTIMES LIVE-BLOGGING OF THE OBAMACARE:

Where’s the most up-to-date language for the bill? Senator Cornyn pushes for it to be made public; Senator Baucus acknowledges that when the panel votes today on the bill, it will be voting on the “conceptual” language.

SO THEY WILL VOTE ON SOMETHING THEY CAN'T READ BECAUSE IT'S NOT EVEN WRITTEN.

Senator Tom Carper, Democrat of Delaware, says this bill is a first step toward transforming a system that costs more than any on earth, but does not produce better outcomes.

THIS IS A LIE - LEFT-WING PROPAGANDA: THE USA GETS BETTER RESULTS THAN THE EU:

1 - WE HAVE A LONGER LIFE EXPECTANCY - OURS IS 79; THEIRS IS 78 ACCORDING TO THE LATEST FIGURES.

WE HAVE LONGER AVERAGE LIFE-SPANS DESPITE HAVING A FATTER POPULATION WITH A MUCH HIGHER % OF BLACKS - WHO DIE YOUNG (AGE 70 YEARS ON AVERAGE); IF THE USA HAD THE SAME % OF BLACKS AS THE EU THEN OUR LIFE EXPECTANCY WOULD BE 81 YEARS.

PLUS WE COUNT PREEMIES AS DEATHS; THE EU COUNTS THEM AS MISCARRIAGES; THIS EFFECTS THE NUMBERS, TOO.

In the USA, black babies are 1½ times as likely as whites to be premature — a major reason that black infant mortality is so much higher than that of whites, says Christopher Howson, vice president for global programs at the March of Dimes.

2 - WE HAVE BETTER RECOVERY RATES FROM MOST MAJOR DISEASES. here's a recent chart for colon cancer and breast cancer: 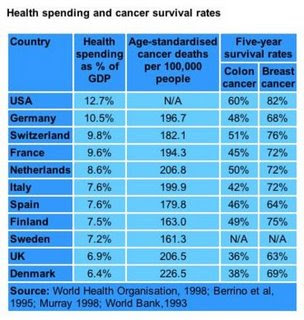 WITHOUT LIES, THE LEFT HAS NOTHING TO OFFER. ALL THEY HAVE IS LIES.

Senator Hatch refers to the controversial report paid for by the insurance industry, saying that no one wants health insurance premiums to rise dramatically. Questioning Mr. Elmendorf, he establishes — again — that the budget office has not done a premium-impact analysis on this bill and that if the budget office had more time, it could do one. “One of the gripes we have on this side is that we’ve just been ramming this through,” says Mr. Hatch, the Republican from Utah.