UP FROM THE SLIME:

I wonder what Obama's Women's Issues Czar will have to say about this?

President Barack Obama's adviser on Muslim affairs, Dalia Mogahed, has provoked controversy by appearing on a British television show hosted by a member of an extremist group to talk about Sharia Law.

Miss Mogahed, appointed to the President's Council on Faith-Based and Neighbourhood Partnerships, said the Western view of Sharia was "oversimplified" and the majority of women around the world associate it with "gender justice".

The White House adviser made the remarks on a London-based TV discussion programme hosted by Ibtihal Bsis, a member of the extremist Hizb ut Tahrir party.

The group believes in the non-violent destruction of Western democracy and the creation of an Islamic state under Sharia Law across the world. 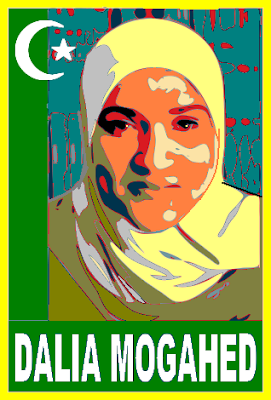 FOR APPEARING WITH HIZBUT TAHRIR AND ENDORSING SHARIA, MOGAHED SHOULD BE FIRED - NOW!


UN AMBASSADOR ANDREW YOUNG WAS FIRED BY CARTER FOR MEETING WITH ARAFAT WHEN ARAFAT WAS STILL RECOGNIZED FOR WHAT HE WAS - A TERRORIST.


DOES OBAMA HAVE A LOWER STANDARD THAN CARTER?


WE SHALL SOON FIND OUT.

MY GUESS IS HE DOES.

OBAMA IS THE WORST PRESIDENT EVER - IN RECORD TIME.

UPDATE: WE SCOOPED MEMORANDUM AND WEASEL ZIPPERS ON THIS - BY THREE HOURS.

REGULAR READERS KNOW WE SCOOP THE BIG BLOGS ALL THE TIME. SPREAD THE WORD; BLOGROLL US, BOOKMARK US.

UPDATE #2: WE SCOOPED HOT AIR BY A DAY ON THIS:

Ah, the “peace” of total oppression.

UPDATE #3: scooped Mark Steyn too.
Posted by Reliapundit at 6:12 PM