IF OBAMA HAS NOTHING TO HIDE, THEN HE WILL AGREE: APPOINT A SPECIAL PROSECUTOR. NOW. 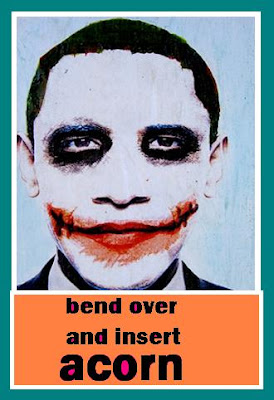 The Wall Street Journal urges the U.S. Justice Department to undertake a criminal investigation of Acorn. This column echoes that call, although we wonder if the Obama administration is compromised here. The president, who as a candidate touted his background as a "community organizer," has extensive ties to Acorn. In February 2008, the Acorn Political Action Committee endorsed Obama over Hillary Clinton, and Obama's campaign Web site, Organizing for America, boasted of the candidate's support for the group:

When Obama met with ACORN leaders in November, he reminded them of his history with ACORN and his beginnings in Illinois as a Project Vote organizer, a nonprofit focused on voter rights and education. Senator Obama said, "I come out of a grassroots organizing background. That's what I did for three and half years before I went to law school. That's the reason I moved to Chicago was to organize. So this is something that I know personally, the work you do, the importance of it. I've been fighting alongside ACORN on issues you care about my entire career. Even before I was an elected official, when I ran Project Vote voter registration drive in Illinois, ACORN was smack dab in the middle of it, and we appreciate your work."

And in August 2008, the Pittsburgh Tribune-Review reported that the Obama campaign paid more than $800,000 to an Acorn "offshoot" for "get out the vote" projects.

Obama worked for Acorn and Acorn worked for Obama. That doesn't mean the president is implicated in any wrongdoing, but it suggests at least that the worse things get for Acorn, the more embarrassing it is for him. If the Justice Department fails to prosecute, it invariably would raise suspicions of political favoritism. This column does not care for special prosecutors, but the case for appointing one would seem to be stronger here than usual.