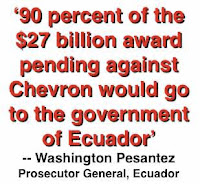 San Francisco blogger Zennie Abraham reported in a post today that Amazon Watch and others like to argue that the government of Ecuador is not a party to the $27 billion environmental lawsuit Amazon Defense Coalition is waging against Chevron Corporation in an Ecuadoran court. In the paragraphs below, I offer evidence that seems to prove very easily that Zennie is right. My proof comes from none other than Washington Pesantez, the South American country’s prosecutor general.

Sources close to the case tell me that, amidst the furor over Chevron’s release of video tapes that appear to implicate Ecuadoran government officials — including President Rafael Correa and Juan Nunez, the judge who was hearing the case but has since recused himself — in a $3 million bribery scheme, Pesantez held a press conference Sept. 4 in his Quito office.

During that press conference, Pesantez said a number of amazing things, one of which stands out: he stated that 90 percent of the $27 billion award pending against Chevron would go to the government of Ecuador. To understand exactly what he said, read the transcript of the prosecutor general’s press conference. It's available in English and Spanish here.

Posted by Bob McCarty Writes at 12:13 AM