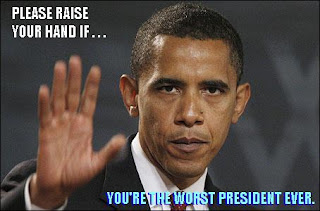 ... unemployed Americans now confront a job market that is bleaker than ever in the current recession, and employment prospects are still getting worse.
Unemployed Workers Competing for Limited Job Prospects

Job seekers now outnumber openings six to one, the worst ratio since the government began tracking open positions in 2000. According to the Labor Department’s latest numbers, from July, only 2.4 million full-time permanent jobs were open, with 14.5 million people officially unemployed.

And even though the pace of layoffs is slowing, many companies remain anxious about growth prospects in the months ahead, making them reluctant to add to their payrolls.

“There’s too much uncertainty out there,” said Thomas A. Kochan, a labor economist at M.I.T.’s Sloan School of Management. “There’s not going to be an upsurge in job openings for quite a while, not until employers feel confident the economy is really growing.”

Obama's job market is worse than at any time during the Bush Administration - even after 9/11.

ER UM . . . SO HOW'S THAT STIMULUS PACKAGE WORKING OUT FOR YOU, MR. OBAMA?

OH, WHAT YOU SAY?

WHY SO LITTLE, WHY ARE YOU HOLDING BACK?

I THOUGHT THEY WERE "SHOVEL READY" PROJECTS?

HERE'S WHAT I THINK:

The bulk of the Stimulus package funds haven't been spent this year and won't be spent until NEXT YEAR because the stimulus package was always really meant to stimulate VOTES for Obama and the Chicago machine NEXT YEAR and - by using the threat of withholding funds from specific Congressional Districts - to keep fence-sitting Democrats on their side of the fence this year. 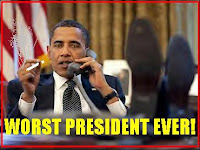 OBAMA - A CORRUPT, VASTLY OVERRATED RADICAL LEFTIST - IS A MISERABLE FAILURE; THE WORST PRESIDENT EVER, IN RECORD TIME.

ROUND UP HERE AT MEMEORANDUM.