WHO ARE THE ASTRO-TURFED THUGS AND WHO ARE THE REAL PEOPLE PETITIONING THEIR GOVERNMENT?

THIS IS THE MOST IMPORTANT POST SINCE OBAMA WAS SWORN IN:

LOOKING AT THE LEFT HAS THE EXPOSE:

... This was the scene when I arrived at Stout Street Clinic in downtown Denver. Nancy Pelosi is to pay a visit to the clinic within the hour. 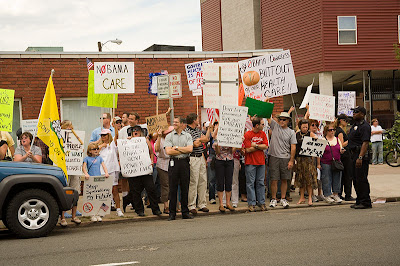 About 200 people opposed to Obama’s healthcare agenda braved the mile high Denver sun and high temperatures to show their opposition.

Their signs indicate that they are well aware that they have been vilified and targeted in an Oval Office astroturfing campaign designed to discredit their opposition. ... 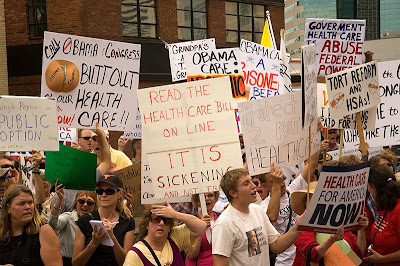 ... This clinic is adjacent to Denver’s day laborer pickup street, Park Avenue. Being fluent in Spanish, El Marco asked these guys “¿hablan ingles?” “casi nada” was the reply from our amigo on the left. ... 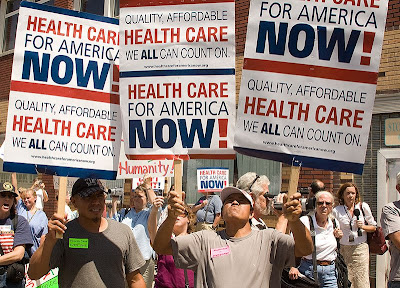 ... I asked him if he could tell me what the signs said. “¿Quien sabe?” (who knows?) was all he said to me, with a big grin. I’m kicking myself for not asking them how much they were getting paid to support the grassroots.

JUST BY LOOKING AT THE SIGNS YOU CAN TELL WHO THE REAL PEOPLE ARE:

*******UPDATE: VIA HOT AIR: AN IRATE VOTER CALLING INTO C-SPAN TAKES ON OBAMACARE, THE LEFT, THE DEMOCRATS OF CONGRESS AND THE SEIU:

Did you read the signs?

Do you actually think that some knucklehead who spent hours taping a plastic butt to his sign is somehow a more "real" voice in this debate?

If you ask me, he's a more stupid voice. Honestly, if you are going to debate an national issue, why would you even think a plastic butt on your sign is going to be taken seriously?

Compare the organization of the two sides: Clear legible signs versus handwritten scrawls with a plastic butt on them.

Good Luck whipping them yahoos into your post-election militias; I'm sure they'll follow Cheney's lead and simply shoot each other in the face.

DAVID; THANKS FOR REVEALING ONCE MORE HOW THE LEFT REALLY FEELS ABOUT THE AMERICAN WORKING CLASS.

YOU'RE A TYPICAL LEFTIST: AN ELITIST WHO THINK HE KNOWS BETTER THAN THE EVERYMAN.,

THIS IS WHY THE REGULAR GUY IS RISING UP: WE DON;LT WANT YOUR STINKING ELITISTS MAKING DECISIONS FOR US.

LIKE ALL LIBS YOU THINK THE PEOPLE ARE DUMB, STUPID NASCAR WATCHING GOD-FEARING IDJITS.


I PRAY YOU AND THE OTHER OBAMANISTA COLLECTIVISTS PASS OBAMACARE.

MEMPHIS: Town hall tension: Meeting turns ugly over health care. “Hundreds of people crowded into the BRIDGES building in Downtown Memphis on Saturday for a congressional town hall meeting that quickly deviated into a raucous shouting free-for-all, requiring extra law enforcement officers to watch over the scene. The meeting, hosted by U.S. Rep. Steve Cohen, D-Memphis, was scheduled to address constituents’ concerns about Social Security and veterans’ benefits, but the real topic of the day was health care reform legislation being crafted by Congress. Most people in the crowd of close to 500 were in loud opposition, although Cohen supporters held their own, waving signs that read ‘Health Care Now.’”

And reader Jeremy Kendall writes: “Interesting note: there was only one handmade sign in support of the public option at the event. All of the rest were handed out by MoveOn.org and the Tennessee Health Care Coalition.”


“Interesting note: there was only one handmade sign in support of the public option at the event. All of the rest were handed out by MoveOn.org and the Tennessee Health Care Coalition.”

“Interesting note: there was only one handmade sign in support of the public option at the event. All of the rest were handed out by MoveOn.org and the Tennessee Health Care Coalition.”

“Interesting note: there was only one handmade sign in support of the public option at the event. All of the rest were handed out by MoveOn.org and the Tennessee Health Care Coalition.”

Don't you love how the same people who were so repelled by a plumber from Ohio claim to have all this solidarity with the little guy?

Larry said...
This comment has been removed by the author.
8:01 AM

I don't think the people are dumb, I think these morons and the rest of the idiot right are morons. These individuals aren't people, they're mindless, ignorant sheep...and you're the biggest sheep of all asshole. You need to remove your head from Glenn Beck's ass for a few minutes and get a grip.