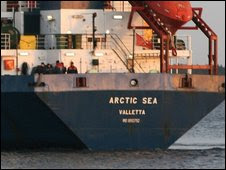 Russian navy ships are hunting in the Atlantic for a 4,000-tonne cargo ship that vanished more than two weeks ago, triggering an international mystery.

Observers have suggested the ship was hijacked, possibly because of a Russian commercial dispute.

The Maltese-flagged ship, the Arctic Sea, has a 15-strong Russian crew.

Carrying timber reportedly worth $1.8m (£1.1m), it sailed from Finland and had been scheduled to dock in the Algerian port of Bejaia on 4 August.

The ship was last sighted in the Bay of Biscay on 30 July, according to the Russian media.

Mikhail Boytenko, editor of Russia's respected Sovfracht maritime journal, said that the ship may have been carrying a secret cargo unknown to the vessel's owners or operators.

"I think there was probably some sort of secret cargo on this vessel, not criminal but secret, and a third party of some sort did not want the cargo to get to another party so this highly sophisticated operation was cooked up," he told Reuters.

"I don't think that it was pirates who took this vessel but it really smells of some sort of state involvement. This is real cloak and dagger stuff, like a (John) le Carre novel."

Mystery still surrounds a missing Russian-manned cargo ship, with a sighting off Africa's Cape Verde islands still to be confirmed.

The Arctic Sea, with 15 Russian crew members on board, was last sighted in the Bay of Biscay on 30 July.

Cape Verde officials say they think the ship is 400 nautical miles (740km) off one of the islands.

But Moscow's envoy to Cape Verde said he had not been informed of any confirmed sighting.

Finnish police say a ransom demand has been made for a missing Russian-manned cargo vessel, the Arctic Sea.

The demand - which has not been confirmed as genuine - was put to the ship's Finnish owners, Finland's National Bureau of Investigation said.

A Finnish radio station said it had been told the 15 crew members' lives would be at risk if it was not paid.

Mystery surrounds the location of the Arctic Sea, last sighted in the Bay of Biscay on 30 July.

A recent sighting off Africa's Cape Verde islands is still to be confirmed.

The mafia probably got rid of it quietly.