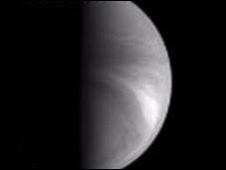 Astronomers are puzzled by a strange bright spot which has appeared in the clouds of Venus.

The spot was first identified by an amateur astronomer on 19 July and was later confirmed by the European Space Agency's Venus Express spacecraft.

... The bright spot has since started to expand, being spread by winds in Venus's thick atmosphere.

Scientists are unsure as to what caused the bright spot tens of kilometres up. However, a volcanic eruption is a possibility. ... an eruption would have needed to be extremely powerful to penetrate this far through the planet's dense, mainly carbon dioxide, atmosphere.

... This is not the first time bright areas have been spotted on Venus. But this feature is unusual because it is confined to a relatively small region.

The spot was first identified by US amateur astronomer Frank Melillo, from Holtsville, New York.

SEND AL GORE TO INVESTIGATE!
Posted by Reliapundit at 12:56 PM