WIND POWER WAS A LOT OF HOT AIR, AFTER ALL... 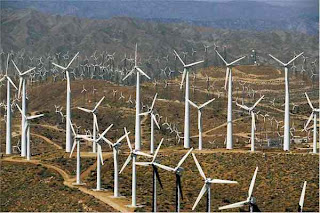 The Obama administration has made offshore wind energy a priority and an important part of its plans to create jobs and combat climate change, but even such favorable political breezes have not been strong enough to propel the nation's first projects.

The economy has intervened, and an unfamiliar federal approval process could hold up leading projects. 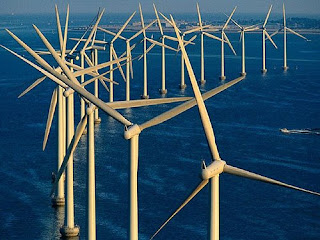 Just last month, Interior Secretary Ken Salazar distributed leases to explore five possible wind farm sites off Delaware and New Jersey on the outer continental shelf. The leases were the first ever, and Salazar proclaimed "a new day for energy production in the United States."

But that day may be years in the dawning.

Developer Bluewater Wind won two of the leases for sites 14 miles off Delaware and 15 to 18 miles off New Jersey. The company seemed to be barreling toward being first in the emerging industry, with plans to plant a wind farm into the seabed at Rehoboth Beach, Del. A year ago, it had even struck an agreement to sell power from the giant windmills to Delmarva Power.

But now, its parent company, Australian investment firm Babcock & Brown, has buckled under the weight of the global economic downturn and is selling off its assets to reduce debt. Bluewater is looking for investors to keep its projects moving.

"They're just reapproaching all of the other players out there, hat in hand,"

THE FREE MARKET HAS INTERVENED - IT ALWAYS DOES; A COMMAND ECONOMY ALWAYS FAILS.

IF GLOBAL WARMING OR CLIMATE CHANGE --- OR WHATEVER ELSE THE ECO-NUTSIES CALL IT THIS WEEK ---WAS REAL, THEN WIND POWER --- (AND EVERY OTHER "ALTERNATIVE" ENERGY SOURCE, THAT IS: ALTERNATIVE TO HARMLESS CARBON BASED ENERGY SOURCES!) --- WOULDN'T BE FAILING BEFORE IT EVEN GOT STARTED.

THE SO-CALLED "GREEN ECONOMY" IS JUST A BULLSHIT NAME FOR SOCIALISM.