Justice Ginsburg Admits She Thought Roe Vs. Wade Was About Eugenics 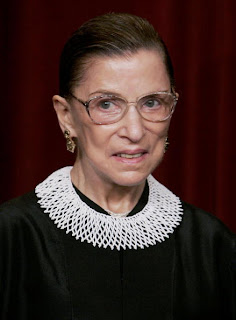 Sometimes you just gotta love your enemies, like, when they tell you the absolute truth. Thanks, Ruth Bader.
From WND:

In an astonishing admission, U.S. Supreme Court Justice Ruth Bader Ginsburg says she was under the impression that legalizing abortion with the 1973 Roe. v. Wade case would eliminate undesirable members of the populace, or as she put it "populations that we don't want to have too many of."

Her remarks, set to be published in the New York Times Magazine this Sunday but viewable online now, came in an in-depth interview with Emily Bazelon titled, "The Place of Women on the Court."

The 16-year veteran of the high court was asked if she were a lawyer again, what would she "want to accomplish as a future feminist legal agenda."

Reproductive choice has to be straightened out. There will never be a woman of means without choice anymore. That just seems to me so obvious. The states that had changed their abortion laws before Roe [to make abortion legal] are not going to change back. So we have a policy that affects only poor women, and it can never be otherwise, and I don't know why this hasn't been said more often.

Question: Are you talking about the distances women have to travel because in parts of the country, abortion is essentially unavailable, because there are so few doctors and clinics that do the procedure? And also, the lack of Medicaid for abortions for poor women?

Ginsburg: Yes, the ruling about that surprised me. [Harris v. McRae – in 1980 the court upheld the Hyde Amendment, which forbids the use of Medicaid for abortions.] 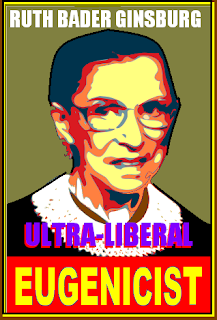 Frankly I had thought that at the time Roe was decided, there was concern about population growth and particularly growth in populations that we don't want to have too many of.

Think about that statement. Go ahead and try to figure out what she could have meant by it.
Anyway you slice it it is still among the most ugly, anti-human statements ever uttered by a major figure on the American political scene.
Posted by Pastorius at 2:35 PM

unreal that a genocidal maniac like this is the highest court in the land.
http://bastardobama.blogspot.com

That is what it comes down to. She is a Eugenicist, and Eugenics are the equivalent of Genocide.

REMEMBER: SOCIALISM HAS KILLED MORE POPLE THAN ANY OTHER IDEOLOGY EXCEPT ISLAM.

FOR THE COMMON GOOD, OF CPOURSE.

She's also a radical feminist who endorses abortion under the guise of 'gender equality' -- by denying men any say in whether or not their babies get to live or die, never mind denying babies the most basic right of all: life.

I seem to remember reading that Ruth Bader Ginsburg has no black staff members, and has never had a black court clerk or other member of her staff. This is especially remarkable as the Supreme Court office is located in a City which is 3/4ths black. She gets away with it because she's a liberal darling and no one in media will make an issue of it.

Maybe it is black people she thinks are "populations that we don't want to have too many of."

That was what the Eugenics movement was founded upon, so I wouldn't be surprised.