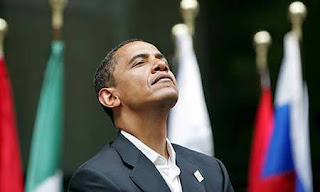 There is no end to the arrogance of this man.


He really believes that he is "The One" and some kind of American royalty.


Now he has put everybody on notice.

Obama struck a defiant tone after a week in which health care reform hit serious roadblocks. He seemed intent on answering a rising chorus of critics who say momentum is slowing for his top domestic priority.

“So I just want to put everybody on notice, because there was a lot of chatter during the week that I was gone: We are going to get this done,” Obama said at his first public event since returning Saturday from a trip abroad. “Inaction is not an option. And for those naysayers and cynics who think that this is not going to happen, don't bet against us.”

Apparently, BHO believes that his wishes dare not be denied - never mind the checks and balances in the United States Constitution.