Waxman-Markey: "a suicidal monument to human folly" - AND PROOF OBAMA'S POLITICAL PLATFORM IS A FANTASY IDEOLOGY

Waxman-Markey would be a very stupid bill even if it were true that 1) the earth is getting warmer, 2) human activity is mostly responsible for climate changes, and 3) a warmer earth would be a bad thing.

Given that all three of these premises are false--we cannot, in fact, control the weather--Waxman-Markey is a suicidal monument to human folly.

THAT PERFECTLY SUMS UP THE IDIOCY OF THE LEFT'S AGW POLICY.

BUT THE FOLLY OF THE LEFT IS DEEPER THAN MERELY THEIR AGW POLICY.

FOLLY IS PERHAPS BEST CHARACTERIZES NEARLY ALL OF THE OBAMA'S PROGRAM:

I THINK THAT LEFTISM IS AT ITS VERY CORE - IOTS VERY HEART AND SOUL - A FANTASIST IDEOLOGY:

... In reviewing these fantasy ideologies, especially those associated with Nazism and Italian fascism, there is always the temptation for an outside observer to regard their promulgation as the cynical manipulation by a power-hungry leader of his gullible followers. This is a serious error, for the leader himself must be as much steeped in the fantasy as his followers: He can only make others believe because he believes so intensely himself.

... The fantasy ideologies of the twentieth century, after all, spread like a virus in susceptible populations: Their propagation was not that suggested by John Stuart Mill’s marketplace of ideas — fantasy ideologies were not debated and examined, weighed and measured, evaluated and compared. They grew and spread like a cancer in the body politic. For the people who accepted them did not accept them as tentative or provisional. They were unalterable and absolute. And finally, after driving out all other competing ideas and ideologies, they literally turned their host organism into the instrument of their own poisonous and deadly will.

... Let there be no doubt about it. The fantasy ideologies of the twentieth century were plagues, killing millions and millions of innocent men, women, and children. The only difference was that the victims and targets of such fantasy ideologies so frequently refused to see them for what they were, interpreting them as something quite different — as normal politics, as reasonable aspirations, as merely variations on the well-known theme of realpolitik, behaving — tragically enough — no differently from Montezuma when he attempted to decipher the inexplicable enigma posed by the appearance of the Spanish conquistadors. Nor did the fact that his response was entirely human make his fate any less terrible. 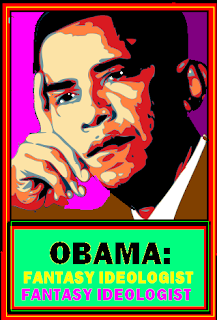 I THINK OBAMA'S APPEAL IS THAT OF A CHARISMATIC FANTASIST PROMOTING A FANTASIST IDEOLOGY.

AND THESE ARE NOT ISSUES OR PLANS WHICH EXIST ON THE POORLY THOUGHT OUT SIDELINES OF OBAMA'S PLATFORM; THEY ARE THE CENTRAL PLANKS OF IT.

THOSE WHO PLACE THEIR CONFIDENCE IN HIM ARE DUPES.

SADLY, WE ARE GOING TO SUFFER THE CONSEQUENCES...

UNTIL 2010 WHEN WE TAKE BACK CONGRESS.
Posted by Reliapundit at 9:09 PM