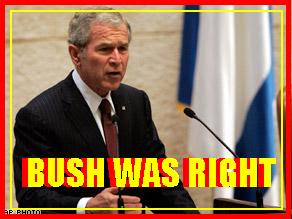 IF YOU'RE NOT A REGULAR ATLAS READER YOU SHOULD BE! ESPECIALLY ON IRAN!

... those who sneer that elections in the broader Middle East are unimportant -- because democracy is more than elections -- have gotten it wrong. An election, as in Iran, can be more than a poll; it can be a fuse. These elections not only summarized Iranian discontent but galvanized it.

THE EVENTS IN IRAN ARE DEFINITELY PROVING HOW CORRECT WAS BUSH'S FOREIGN POLICIES IN THE REGION,

Some of the violence you see in Iraq is being carried out by ruthless killers who are converging on Iraq to fight the advance of peace and freedom.

Our military reports that we have killed or captured hundreds of foreign fighters in Iraq who have come from Saudi Arabia, Syria, Iran, Egypt, Sudan, Yemen, Libya and other nations.

They are making common cause with criminal elements, Iraqi insurgents, and remnants of Saddam Hussein's regime who want to restore the old order.

They fight because they know that the survival of their hateful ideology is at stake.

They know that as freedom takes root in Iraq, it will inspire millions across the Middle East to claim their liberty as well.

And when the Middle East grows in democracy, prosperity, and hope, the terrorists will lose their sponsors, lose their recruits, and lose their hopes for turning that region into a base for attacks on America and our allies around the world.

REPEAT: They know that as freedom takes root in Iraq, it will inspire millions across the Middle East to claim their liberty as well.

Some people suggest that if the United States would just break ties with Israel, all our problems in the Middle East would go away.

This is a tired argument that buys into the propaganda of our enemies, and America rejects it utterly.

Israel's population may be just over 7 million. But when you confront terror and evil, you are 307 million strong, because America stands with you.

America stands with you in breaking up terrorist networks and denying the extremists sanctuary.

And America stands with you in firmly opposing Iran's nuclear weapons ambitions. Permitting the world's leading sponsor of terror to possess the world's deadliest weapon would be an unforgivable betrayal of future generations. For the sake of peace, the world must not allow Iran to have a nuclear weapon.

Ultimately, to prevail in this struggle, we must offer an alternative to the ideology of the extremists by extending our vision of justice and tolerance, freedom and hope.

These values are the self-evident right of all people, of all religions, in all of the world because they are a gift from Almighty God.

Securing these rights is also the surest way to secure peace.

Leaders who are accountable to their people will not pursue endless confrontation and bloodshed.

Young people with a place in their society and a voice in their future are less likely to search for meaning in radicalism. And societies where citizens can express their conscience and worship their God will not export violence, they will be partners for peace.

This fundamental insight, that freedom yields peace, is the great lesson of the 20th century.

Now our task is to apply it in the 21st.

Nowhere is this work more urgent than here in the Middle East.

We must stand with the reformers working to break the old patterns of tyranny and despair.

We must give voice to the millions of ordinary people who dream of a better life in freedom.

We must confront the moral relativism that views all forms of government as equally acceptable and thereby consigns whole societies to slavery.

Above all, we must have faith in our values and ourselves and confidently pursue the expansion of liberty as the path to a peaceful future.

That future will be a dramatic departure from the Middle East of today.

REPEAT: We must stand with the reformers working to break the old patterns of tyranny and despair.

I have been very critical of many things Bush did: the attempted amnesty for illegal aliens, spending money like a drunk sailor, not vetoing a dang thing, mishandling the Wilson-Plame affair, the whole "ROP" BS... and so on - in short: I criticized him for being a liberal, albeit a classical one.

BUT BUSH SURE GOT FOREIGN POLICY AND NATIONAL DEFENSE RIGHT.

You know.... one of the secondary reasons I'm rooting for the Iranians is so that the lefties in the USA will stop saying you can't export or impose democracy - (that we neocons are stupid imperialist for wanting to) - and STFU.

*******UPDATE: PREDICTION: BUSH'S SPEECHES WILL BE LONG REMEMBERED AFTER OBAMA'S ARE LONG FORGOT.

Not was right ... is. And breaking the post Presidency (honorary) code, remaining silent? He tried to be true to his nature, his own integrity. Until simply, it was no longer possible.

If Bush's foreign policy was right then we [Israelis] are doomed,and y'all better invest in brightly coloured Saudi prayer rugs for your children.

"Young people with a place in their society and a voice in their future are less likely to search for meaning in radicalism."

But, unfortunately, many in the USA have...and shame on them!

Here's some of Bush being right. Also on this one are some talking heads at MSNBC, so convinced that Bush was wrong and their beloved Obama was right, just tearing Bush up for his statements. For their part in getting Obama elected, I hold the MSM responsible and will never, never forget or forgive them.

Take care of it yourselves then, Michael Travis. And you're welcome for the lack of SCUD missiles.

Posting everything in bold makes this site unreadable :(