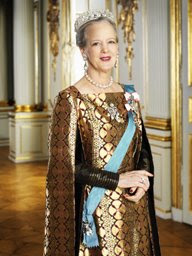 Throughout Europe voter turnout for EU parliamentary elections was relatively weak, and the Socialists suffered an across the board setback.

Of course the Social Democrats tried to put a positive spin on things, as they reminded voters that they were still the single largest Danish EU party.

The fact is the 3 center/right of center parties that govern Denmark made gains.

Still the Danish EU delegation is split 6 Right / 6 Left and 1 EU skeptic party. Notably, the center of gravity of the EU skeptic movement is firmly on the Right.

Our readers might ask: Why was the voter turnout so high in Denmark?

Well when Crown Prince Frederik and his lovely wife Princess Mary were expecting their firstborn child, former Prime Minister Anders Fogh Rasmussen put a referendum on the ballot to amend the Grundlov (Constitution of Denmark) and give a female first born child equal right to the inherit the throne as a male. (Queen Margarethe II, who is currently reigning in Denmark, assumed the thrown via a Parliamentary vote which avoided having the crown go to her fathers brother Arveprins Knud ). This referendum was scheduled to take place during this weekends EU vote.

In the meantime Mary gave birth to a boy.

So this law may not be relevant for another 40 years. In the course of the campaign, a debate ensued as some voters wanted to have a more comprehensive review of the Constitution - others wanted to make Denmark a Republic. (What choice was the government offering voters?) 75% of the votes cast were for changing the law and giving a firstborn girl the right to assume the throne. Supporters of the amendment proclaimed it as a victory for Equal Rights.

This demonstrates that Denmark was a leader when it comes to women's rights!

It only seems a joke.
The real explanation is that the left wing in danish politics for a long time has wanted to "modernize" the constition, in effect write the EU, "human rights", "social rights" and other leftist causes into the text.
The center-right are perfectly satisfied with the present constitution, which basically dates back to 1849 and has served the danes well for as long as that, and feared that the left - if they come to power again - would use the "royal cause" as a vehicle for changing the text.
Now this possibility has been removed, and a revision of the constitution which is anathema to us "rigthwingers" has effectively been removed far into the future.
So in reality the referendum had a connection to the EU (at least in the broad perspective), and was yet another victory for the center-right.
polinos