AZNAR: "This is no time for hesitation on the part of the West." 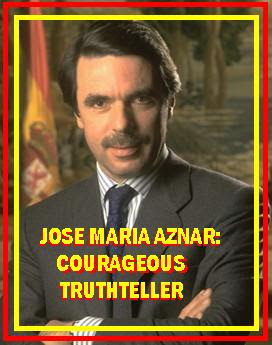 If there hadn't been dissidents in the Soviet Union, the Communist regime never would have crumbled. And if the West hadn't been concerned about their fate, Soviet leaders would have ruthlessly done away with them. They didn't because the Kremlin feared the response of the Free World.

Just like the Soviet dissidents who resisted communism, those who dare to march through the streets of Tehran and stand up against the Islamic regime founded by the Ayatollah Khomeini 30 years ago represent the greatest hope for change in a country built on the repression of its people. At stake is nothing less than the legitimacy of a system incompatible with respect for individual rights. Also at stake is the survival of a theocratic regime that seeks to be the dominant power in the region, the indisputable spiritual leader of the Muslim world, and the enemy of the West.

The Islamic Republic that the ayatollahs have created is not just any power. To defend a strict interpretation of the Quran, Khomeini created the Pasdaran, the Revolutionary Guard, which today is a true army. To expand its ideology and influence Iran has not hesitated to create, sustain and use proxy terrorist groups like Hezbollah in Lebanon and Hamas in Gaza. And to impose its fundamentalist vision beyond its borders, Iran is working frantically to obtain nuclear weapons.

Those who protest against the blatant electoral fraud that handed victory to the fanatical Mahmoud Ahmadinejad are in reality demanding a change of regime. Thus, the regime has resorted to beating and shooting its citizens in a desperate attempt to squash the pro-democracy movement.

This is no time for hesitation on the part of the West. If, as part of an attempt to reach an agreement on the Iranian nuclear program, the leaders of democratic nations turn their backs on the dissidents they will be making a terrible mistake.

AZNAR IS 100 TIMES THE MAN OBAMA IS. AND ZAPATERO, TOO.

IT IS A VERY SAD TIME FOR THE FREE WORLD WHEN A CORRUPT, INEXPERIENCED SOCIALIST LIKE OBAMA ISM POTUS.

VERY SAD - ESPECIALLY NOW FOR THE IRANIANS, BUT SOON ALL OF US.

YES: ALL OF US - THE WHOLE FREE WORLD, UNLESS WE STOP OBAMA.

MORE HERE - AT AMERICAN POWER.
Posted by Reliapundit at 7:01 PM