Swedish health authorities have ruled that gender-based abortion is not illegal according to current law and can not therefore be stopped, according to a report by Sveriges Television.

The Local reported in February that a woman from Eskilstuna in southern Sweden had twice had abortions after finding out the gender of the child.

The woman, who already had two daughters, requested an amniocentesis in order to allay concerns about possible chromosome abnormalities. At the same time, she also asked to know the foetus's gender.

Doctors at Mälaren Hospital expressed concern and asked Sweden’s National Board of Health and Welfare (Socialstyrelsen) to draw up guidelines on how to handle requests in the future in which they "feel pressured to examine the foetus’s gender" without having a medically compelling reason to do so.

The board has now responded that such requests and thus abortions can not be refused and that it is not possible to deny a woman an abortion up to the 18th week of pregnancy, even if the foetus's gender is the basis for the request.

THIS IS NO LONGER LEGAL IN CHINA, BUT IT'S NOW LEGAL IN SWEDEN. 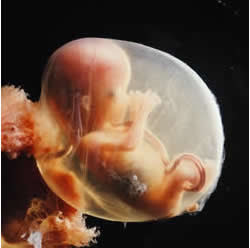 THE LEFT TODAY ENABLES MOTHERS TO MURDER THEIR BABIES. IN THE WOMB - OR OUT.

MORE ON GENDERCIDE AT WIKI.
Posted by Reliapundit at 9:10 PM

a slippery slope or a mud slide?

^^ No? I guess it was okay if your mother killed you when you were in her womb. It doesn't matter if they're born or not, they're still living beings. They have eyes and eyes and toes and bellies and noses and hearts, so don't you dare say its not a baby since its not "borned".