SOTOMAYOR: HER "MACACA MOMENT" MEANS SHE'S NOT QUALIFIED TO BE A JUROR 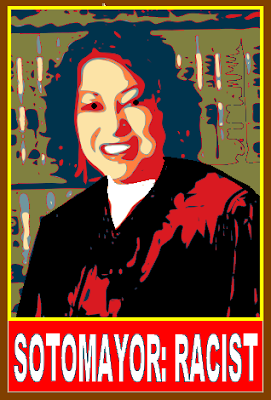 SOTOMAYOR HAS SAID THAT SHE IS PROUD TO BE A RACIST.

NOT THE SHE IS PROUD TO BE A WOMAN AND A PUERTO RICAN, BUT A RACIST.

AND SHE SAID IT A LOT, NOT ONCE - BUT A LOT, AND IN WRITING.

SHE WOULD NOT QUALIFY TO BE A JUROR; FACTS IN A POST BY MCCARTHY, AND A ROUND UP HERE.
WE STOPPED HARRIET MIERS; WE CAN STOP SOTOMAYOR.

AND ANOTHER THING: ONCE AGAIN OBAMA'S DECISION-MAKING AND VETTING OF NOMINEES HAS FALLEN WAY WAY SHORT.

UPDATE: I THINK OBAMA IS GONG TO LOSE THIS -AND SOONER THAN YOU THINK! THE LATEST FROM AP:

President Barack Obama on Friday personally sought to deflect criticism of Supreme Court nominee Sonia Sotomayor, who finds herself under intensifying scrutiny for saying in 2001 that a female Hispanic judge would often reach a better decision than a white male judge. "I'm sure she would have restated it," Obama flatly told NBC News, without indicating how he knew that.

The quote in question from Sotomayor has emerged as a rallying call for conservative critics who fear she will offer opinions from the bench based less on the rule of law and more on her life experience, ethnicity and gender. That issue is likely to play a central role in her Senate confirmation process.

"I think that when she's appearing before the Senate committee, in her confirmation process, I think all this nonsense that is being spewed out will be revealed for what it is," Obama said in the broadcast interview, clearly aware of how ethnicity and gender issues are taking hold in the debate.

The president's damage control underscored how the White House is eager to stay on message as the battle to publicly define Sotomayor picks up.

Obama's top spokesman, Robert Gibbs, told reporters about Sotomayor: "I think she'd say that her word choice in 2001 was poor."

... She said in 2001: "I would hope that a wise Latina woman with the richness of her experiences would more often than not reach a better conclusion than a white male who hasn't lived that life." The remark was in the context her saying that "our gender and national origins may and will make a difference in our judging."

Sotomayor's comments came in a lecture, titled "A Latina Judge's Voice," that she gave in 2001 at the law school of the University of California, Berkeley.

After three days of suggesting that reporters and critics should not dwell on one sentence from a speech, the White House had a different message Friday.

... More than one line in the 2001 speech has helped drive the debate over Sotomayor's judgment.

She also said, for example: "Personal experiences affect the facts that judges choose to see."

WORD CHOICE!? SHE FREAKIN WROTE AN ESSAY TITLED "A LATINA JUDGE'S VOICE" - THE WHOLE FRIGGIN POINT OF THE ESSAY AND ADDRESS WAS RACIST.

WE STOPPED HARRIET MIERS; WE CAN STOP SOTOMAYOR.
Posted by Reliapundit at 8:32 PM

Well, I don't really believe his vetting has fallen short. I think he actually believes in these people, and their ideas. These are his friends and associates, the people he admires.

THAT'S NOT THE POINT PASTO!

HE AGREED/LIKED WITH DASCHLE, BUT MISTAKENLY FELT THE ISSUES RAISED BY FACTS IN THE NOMINEES CV WEREN'T DISQUALIFYING WHEN THEY WERE.

THIS IS BAD JUDGMENT.

UNLESS THE VETTORS OBAMA HAS SELECTED ARE SECOND RATE AND FAILED TO FIND THE PROBLEMATIC FACTS.

I ARGUE IT'S BOTH: BAD VETTING AND BAD JUDGMENT.

BOTH ARE DUE TO HUBRIS AND BEING SO FAR LEFT THAT THEY DON'T REALLY HAVE ANY MORAL COMPASS ANYMORE.

No -- this is not bad judgment. She's a great choice. As for the racist and juror tropes, check out these arguments:

"Racist" Sotomayor Defends White Employee From Dismissal Due to His Circulation of Racist LiteratureAndrew McCarthy's Argument Against Sotomayor Would Disqualify O'Connor and Scalia as Well!