OBAMA POLL NUMBERS ARE AVERAGE - but the pro-Obama propaganda is above average!

Obama's 63 percent average, according to a study released by Gallup last month, is the highest for a new president since Jimmy Carter (he clocked in at 69 percent during his first 100 days).

But John F. Kennedy bested Obama by more than 10 points, with 74 percent. Dwight Eisenhower enjoyed a 71 percent rating early on.

Overall, Obama's average for the first three months matched the historical average of 63 percent for presidents since Eisenhower.

When you include presidents who took the oath mid-term -- after the death or resignation of a president -- Obama's 63 percent looks paltry. 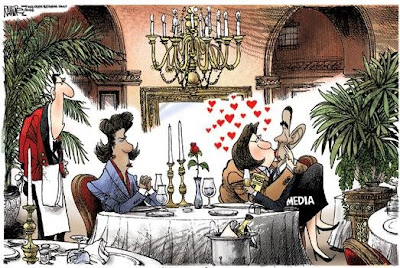 THE GOOGAHGAH OBAMA HOOPLA IS REALLY JUST MSM PROPAGANDA. THE MSM FAVORED OBAMA WITH OVERWHELMINGLY POSITIVE COVERAGE DURING THE CAMPAIGN:

("Comments made by sources, voters, reporters and anchors that aired on ABC, CBS and NBC evening newscasts over the past two months reflected positively on Obama in 65 percent of cases, compared to 31 percent of cases with regards to McCain, according to the Center for Media and Public Affairs."),

AND SINCE HE HAS BEEN POTUS:

President Obama is getting more coverage, and more positive coverage, from the media than his two predecessors.

CBS had almost 11 hours. NBC was next with nine and a half. ABC had seven and a third. The study looked at the first half-hour of "Special Report" on FOX and we had 10 hours, 24 minutes. 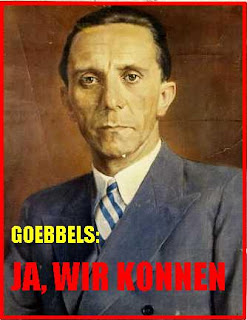 THE PRO-OBAMA COVERAGE IS THE FLIP-SIDE OF THEIR NON-STOP DOOM'N GLOOM/"A DEPRESSION-IS-COMING" CRAP FROM THE TIME MCCAIN TOOK THE LEAD UNTIL OBAMA'S PORKASAURUS "STIMULUS" BILL WAS PASSED.

THE FOURTH ESTATE HAS DEVOLVED INTO OBAMA GOEBBELS-LIKE PROPAGANDA MINISTRY.

I'm just glad to see a politician standing up to the ruthless strong-arm tactics of the the big firms/corporations that basically rob from the poor and helpless to line their already full pockets.

OBAMA IS STANDING UP TO WHICH CORPORATIONS?!?!?

THE BIG RUTHLESS CORPORATIONS OBAMA AND GEITHNER ARE GIVING BILLIONS TOO!?!?!?