MOOKIE WENT TO TURKEY AND MET WITH GUL AND ERDOGAN! 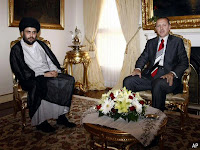 We haven't heard much lately from Moqtada al-Sadr, the erstwhile leader of the Sadrist movement and the Jaysh al-Mahdi who is reportedly living in Iran. Sadr has not been officially been seen in public since June of 2007, and last appeared on the media in al-Jazeera interview in May 2008. So it is a bit of a surprise to see him suddenly appear in Turkey for two days of talks. What's he up to?

According to Turkish reports, Sadr met with Prime Minister Erdogan and President Abdullah Gul, along with other Turkish officials.No official statement was released from the meetings with Turkish officials. Al-Zaman reports that an unidentified Turkish official said that they discussed the security situation in Iraq and the evolving Turkish-Iranian relationship. A leading Sadrist said that Sadr went to Turkey from Tehran to follow up on conversations between Turkish officials and Sadrists in Najaf about the future of Iraq (which according to al-Zaman is the first official admission by the Sadrists that he has been in Iran).

Perhaps as important, Sadr also reportedly met with a large number of Sadrist officials and personalities as well as a delegation of top leaders who came up from Iraq. He reportedly laid out the political strategy for the movement in the new era.

The picture remains unclear regarding the reasons behind Moqtada al-Sadr's surprise appearance in Turkey after an almost two year absence in Iran, even if it was [officially] announced that al-Sadr was in Turkey to attend a conference called "The al-Sadr movement and future challenges."

The welcome that al-Sadr received in Turkey with regards to his meeting with both the Turkish President and Prime Minister justifies questions being asked on the real motive behind the visit. Some of the Arabs concerned [with this turn of events] believe that Turkey is beginning to play the role that it desires which confirms that it has the [requisite] power and position [in the region]. This is confirmed by the appointment of the new Turkish Foreign Minister Ahmet Davutoglu, who's of the "let's tackle and clear all issues" school of thought.

THIS IS A BAD DEVELOPMENT: