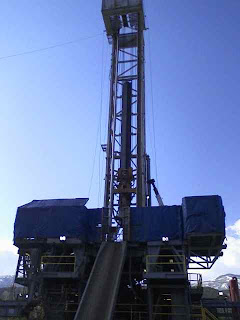 President Barack Obama has put America into the hands of “environmental radicals.” It is only a matter of time before “his vast popularity runs aground on his energy policies,” according to Jon Basil Utley, writing in Reason magazine.

“In the name of saving the planet from global warming, [Obama] has delayed new oil drilling, an action that will have major political repercussions once the world economy recovers. Instead of using some of the stimulus billions to produce more gas and oil, Obama’s appointees dream of ‘renewable’ energy derived from corn, wind, sunshine, and even grass,” Mr. Utley says in his article.

Read more about this writer's reasonable -- pun intended -- point of view here.
Posted by Bob McCarty Writes at 9:32 AM