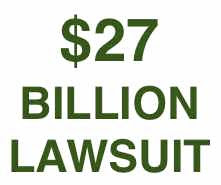 If you’re like most Americans, you’ve probably heard little about an environmental lawsuit that has potential to produce the largest settlement in the history of the world. In the space below, I offer for free information that might best be described as “The Definitive Guide to the Chevron Ecuador Lawsuit (hereinafter referred to as “The Guide“).”

Before I introduce the contents of The Guide, however, let me offer a brief overview of the lawsuit:

The case pits the Amazon Defense Coalition, led by a Philadelphia-based lawyer, who claims to represent tens of thousands of indigenous people damaged by the reckless actions of Texaco Oil Company as it operated in a partnership with state-owned PetroEcuador from 1964 to 1990. Because Chevron Corporation purchased Texaco in 2001, the United States’ third-largest company became the target of — or defendant in — the class-action lawsuit that’s now in its 16th year and is expected to be decided upon in an Ecuadoran court within months.

To find all of the details and The Guide to the case, click here.

Posted by Bob McCarty Writes at 8:54 AM

Also, here's a great blog about the mess Chevron left in Ecuador: http://www.thechevronpit.blogspot.com

Anna Kay -- That's not a great blog at all, because it sides with the class-action filers from Philadelphia, not with justice.