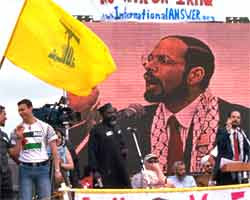 First thing on this morning's news, before I had even gotten down my first cup of coffee, one of the local news channels here welcomed CAIR's co-founder and Director Nihad Awad for a smarmy interview, in which the news anchor appeared thrilled to be graced with the presence of one of those Moslems to whom BHO has reached out at least three times since taking office last January 20 — most recently, yesterday in Turkey.

In this morning's interview, according to Nihad Awad, who participated in a 1993 Hamas meeting in the United States — a fact apparently unknown by the interviewer — BHO is an American President who understands the following: "American Muslims have suffered tremendously since 9/11." Perennial victimhood in the typical style of CAIR, and the news anchor nodded both solemnly and eagerly in agreement as she sucked down the Kool-aid in huge gulps.

I, on the other hand, nearly choked on my coffee....