YET ANOTHER CRACK IN BHO'S TEFLON

Remember all those adoring crowds BHO used to have in Europe? They loved him then: 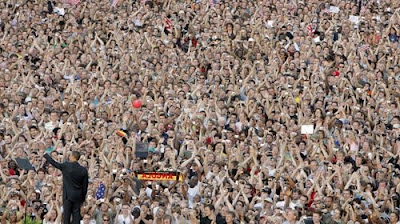 Not so much now.

No Givens As Obama Steps Onto World Stage

After 69 days in which international issues have taken a back seat to attempts to rescue the economy at home, President Obama takes the world stage this week as a wildly popular figure among the people of Europe, but one who faces a difficult task in selling his plans to the continent's leaders.

But if the U.S. president thought his popularity would cause foreign governments to fall quickly into line behind a new American leadership, experts warn, he could be in for a rude awakening....

BHO's fellow Democrats are in damage-control mode, and blaming GWB too:

...[R]eplacing Bush with Obama has not erased the substantial disagreements that remain between the United States and Europe.

"That's an invitation to disillusionment," said Sen. John F. Kerry (D-Mass.), chairman of the Senate Foreign Relations Committee. "These are complicated times. There's an anger in the world . . . about how people think our country has helped create these problems. The president has to lift heavily to get us over the Bush hurdle."

This blaming-Bush line is wearing thin. The current President has to step up to the plate and stop whining about his predecessor. In fact, such whining is decidedly adolescent.

Well, maybe that's where BHO is - stuck in adolescence. His refusal to accept responsibility and accountability reminds me of the less-mature students I work with every day for the past thirty-five years.
Posted by Always On Watch at 8:59 AM

I think what makes Obama so annoying is that he thinks by force of his charm problems will go away. The media gave him a pass on the Special Olympics crack. I am wondering how long Trent Lott would have been treated for a similar remark.

He was not ready to be President. Many people voted for him as a symbol
and he ran on hope with zero substance.

I want a leader, not a charmer.