OBAMA IS SO AWFUL EVEN THE AP SAYS HE'S CRASHED! 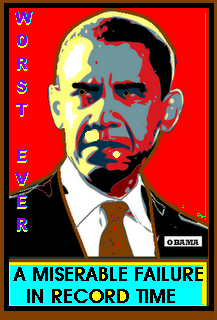 In office two months, he has backpedaled on an array of issues, gingerly shifting positions as circumstances dictate while ducking for political cover to avoid undercutting his credibility and authority.

That's happened on the Iraq troop withdrawal timeline, on lobbyists in his administration and on money for lawmakers' pet projects.

CRASHED. THE PROBLEM IS: HE'S TAKING US DOWN WITH HIM! 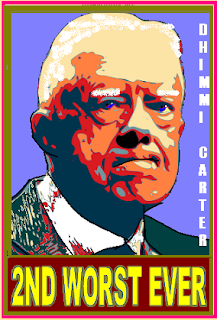 OBAMA IS ALREADY THE WORST PRESIDENT EVER.

THAT MAKES ONE PERSON HAPPY: DHIMMI CARTER!
Posted by Reliapundit at 5:08 PM

Our President is a loser.

We are so doomed.

The only bright spot to this whole thing is the weak, thin schadenfreude of gloating at all the Germans and Brits (and their socialist media) who had orgasms when he won the election.

Is this the total snotnozzle you were cheering?

Take him - you can have him. He's yours.