MORE PROOF OF THE IDIOCY OF POLITICAL LEADERS 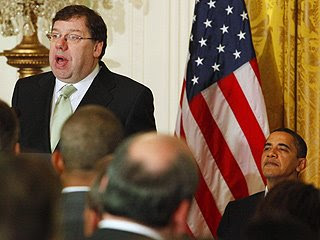 But I repeat myself.

On St. Patrick's Day, Irish Prime Minister Brian Cowen did some repeating of his own when he reiterated the words from BHO's teleprompter:

WASHINGTON -- Irish Prime Minister Brian Cowen was just a few paragraphs into an address at a St. Patrick's Day celebration at the White House when he realized something sounded way too familiar. Turns out, he was repeating the speech President Barack Obama had just given.

Cowen stopped and looked back at the president to say, "That's your speech."

Obama laughed and returned to the podium...