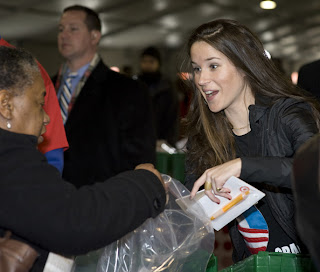 UPDATED AT THE BOTTOM!

IT'S ALL OVER THE PLACE. DRUDGE:

HERE'S A STORY ABOUT HER WILD COLLEGE DAYS IN NEW ORLEANS.

I believe the year was 1999. It was either September or October. I was a junior at Tulane University ready to start yet another fantastic year of college. I, being in a fraternity that sat right across from an all girls dorm, was very excited at the prospect of a new crop of freshman girls. One of those girls? None other than Ashley Biden.

I never paid it any mind. And I would imagine most people at the school didn’t. I just remember meeting her and someone telling me she was the daughter of Senator Joe Biden. I can even recall that first meeting. She was extremely attractive and definitely dressed to “party.” I’ll never forget the short shorts she always used to wear. And boy could she party. She just had a way about her. A cute face, sick body, and a charm that people were definitely attracted to.

Every single time I saw this girl out she was hammered. I’m not quite sure as to her sexual history at Tulane, but rumors have it that threesomes were common and that drug use was rampant.

ACCORDING TO RADAR, THE VEEP SAYS IT WAS A SET-UP!


IF THIS WAS ONE OF MCCAIN'S OR ROMNEY'S DAUGHTERS THE WORLD WOULD BE GOING APESHIT!
Posted by Reliapundit at 11:20 PM

First I've heard of this.

Of course. It's a leftista's family scandal.