HOLOCAUST CONCERT EXPOSES FATAH FOR WHAT IT TRULY IS: ANTISEMITIC SCUM NOT TO BE TRUSTED 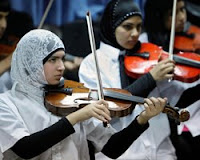 Palestinian authorities disbanded a youth orchestra from a West Bank refugee camp after it played for a group of Holocaust survivors in Israel, a local official said on Sunday.

Adnan Hindi of the Jenin camp called the Holocaust a political issue and accused conductor Wafa Younis of unknowingly dragging the children into a political dispute.

He added that Younis has been barred from the camp and the apartment where she taught the 13-member Strings of Freedom orchestra has been boarded up.

"She exploited the children," said Hindi, the head of the camp's popular committee, which takes on municipal duties. "She will be forbidden from doing any activities.... We have to protect our children and our community."

The move highlights the sensitivity of many Palestinians over acknowledging Jewish suffering, fearing it would weaken their own historical grievances against Israel. "The Holocaust happened, but we are facing a similar massacre by the Jews themselves," Hindi said. "We lost our land, and we were forced to flee and we've lived in refugee camps for the past 50 years."

THIS IS DISGUSTING ON EVERY LEVEL: THE FALSE EQUIVALENCE; THE FALSE HISTORY - AND SO ON...

UNTIL THESE ARABS ACKNOWLEDGE THE TRUTH - ABOUT THE HOLOCAUST, THEMSELVES AND THEIR HOLLOW CLAIM FOR YET ANOTHER ARAB STATE - THERE WILL BE NO PEACE.

THE NYTIMES WEIGHS IN HERE. EXCERPT:

Adnan al-Hindi, the leader of the camp’s Popular Committee, a grassroots group representing the Palestine Liberation Organization, said the young musicians had been exploited by the orchestra director, Wafaa Younis, for the purpose of “normalizing” ties with Israel.