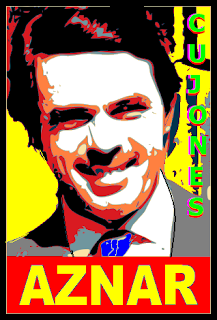 The International Herald Tribune (via Kishkushim and Chazarah) has criticized Muslims for demanding an apology from the Pope for his own remarks about Islam:

MADRID, Spain Former prime minister Jose Maria Aznar has criticized Muslim demands for the pope to apologize for his remarks about Islam, suggesting it is unfair when the Islamic world has not asked forgiveness for such grievances as the 800-year Moorish occupation of Spain.

Aznar, speaking Friday night at the Hudson Institute, a thinktank in Washington, D.C., also said a United Nations program to encourage dialogue between Muslim and Western countries made no sense because some Muslim countries like Iran are too radical to deal with.

Aznar said he found it surprising that Muslims have demanded an apology from Pope Benedict XVI over his Sept. 12 remarks quoting a Byzantine emperor who characterized some of the teachings of the Prophet Muhammad as "evil and inhuman," particularly "his command to spread by the sword the faith."

The pope said Sunday that he was "deeply sorry" about the reactions to his remarks and that they did not reflect his own opinions. But did not issue the direct apology still demanded by some Muslim leaders who were offended by his remarks.

Aznar noted the nearly 800-year Moorish occupation of Spain, which began in the year 711 with an invasion from North Africa. He said in English: "I never (heard) any Muslim apologize (to) me (for) conquer(ing) Spain and to maintain a presence in Spain during eight centuries."

"What is the reason ... we, the West, always should be apologiz(ing) and they never should ... apologize? It's absurd."

He also criticized an initiative launched by his Socialist successor, Jose Luis Rodriguez Zapatero, to encourage dialogue between the West and Muslim countries. It is called the Alliance of Civilizations and has been formally adopted by the United Nations.

Aznar said some Muslim countries such as Iran are too radical to engage in dialogue with.

And if only Barack Obama would start considering this too. Aznar most definitely has what Zapatero doesn't.
Posted by Avi Green at 5:54 PM

Well, he is a casualty of Al Qaeda and we now have a Rodriguez Zapatero type in Barry Hussein @ 1600 Pennsylvania.

Apologize to Muslims? Over my dead Roman Catholic body...

31 May 2009
One can criticize Islam or other religions. But, it is looking at the " BEHAVIOR" of the believers, that makes the difference.For instance, how do the Christians justify the whole concept and practice of Vatican rule ? The numerous attempts at crusading ? Colonizations of the world by the Western Europeans? As I understand, Jesus tried to teach humanity, submission, peace, brotherhood and tolerance. I find it quite contrary to the examples which I mentioned above.
I wish us the humans, practice his teachings. But,I see that we are still the same animal that Jesus was trying to tame, to save from ourselves, and, "HUMANIZE".We have failed him.