WHAT GM'S HQ - THE RENAISSANCE CENTER - TELLS US ABOUT THE AUTO INDUSTRY, THEIR BAILOUT, AND THE STIMULUS PACKAGE 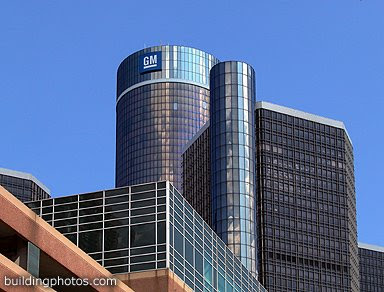 THE EXTRAORDINARY BUILDING KNOWN AS THE RENAISSANCE CENTER IS GM'S HQ.

AND IT TELLS US A LOT ABOUT THE AUTO INDUSTRY, THEIR BAILOUT, AND THE STIMULUS PACKAGE:

Conceived by Henry Ford II and financed primarily by the Ford Motor Company, the Renaissance Center became the world's largest private development with an anticipated 1971 cost of $500 million.[6] In part, civic leaders intended this ambitious urban renewal project to quell the white flight which increased, following the social unrest from the 12th Street riot in 1967.

The project was intended to revitalize the economy of Detroit.

... John Portman was the principal architect for the original design. The first phase constructed a five-building rosette, with a 73-story hotel surrounded by four 39-story office towers. This first phase officially opened in March 1977. Portman's design renewed attention to city architecture,[2] constructing the world's tallest hotel at the time.[1] Two additional 21-story office towers opened in 1981. This type of complex has been termed a city within a city.

In 2003, General Motors completed a $500 million renovation of its world headquarters in the Renaissance Center, which it had purchased in 1996.[3] The renovation included the addition of the five-story Wintergarden, which provides access to the International Riverfront.[4] Architects for the renovation included Skidmore, Owings & Merrill, Gensler, SmithGroup, and Ghafari Associates. Work continued in and around the complex until 2005. The Renaissance Center totals 5,500,000 square feet (511,000 m2) making it one of the world's largest office complexes.[5]

IT WAS A FAILURE FOR FORD. THEY DUMPED IT AT A LOSS.

AS A STIMULUS FOR DETROIT, IT WAS ALSO A FAILURE:

Imagine living in a city with the country's highest rate for violent crime and the second-highest unemployment rate.

As an added kicker you need more Superfund dollars allocated to your city to clean up contaminated toxic waste sites than just about any other metro.

Unfortunately, this nightmare is a reality for the residents of Detroit.

The Motor City grabs the top spot on Forbes' inaugural list of America's Most Miserable Cities.

FOR GM IT WAS A FAILURE, TOO:

AND GM - WHO BOUGHT THE $500 MILLION WHITE ELEPHANT FOR $73 MILLION - CAN HARDLY BE SAID TO HAVE BENEFITED AFTER SPENDING ANOTHER $500 MILLION RENOVATING IT.

AND THIS IS WHAT IT TELLS US ABOUT THE BAILOUT, THE STIMULUS: