OBAMA'S GREATEST ACCOMPLISHMENT SO FAR: CRAPPING UP THE PLACE AS BADLY IN 4 WEEKS AS CARTER DID IN FOUR YEARS! 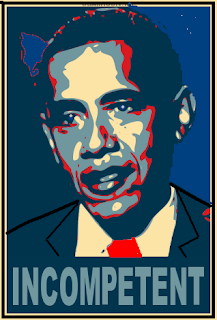 Posted by Reliapundit at 7:37 PM

What happens to a President who is so thoroughly incompetent? Will he be able to continue through four years?

PREDICTION: HE'S GONNA RESIGN AND TAKE A POSITION IN KENYA AS A WITCHDOCTOR.

A POSITION HE'S QUALIFIED FOR!

Well, you're joking, but I'm seriously wondering if the guy is going to have to resign.

Clinton's first few months in office were bad too. But, I don't remember them being this bad.

To me, Obama seems like a guy who got out of Harvard, after having created his own major for an Masters Degreee in Marketing. He wrote his thesis on how Marketing and Politics can come together to create public policy. And, he never gave any thought to political theory.

And apparently, the American public didn't think that one through either.

Reliapundit - Go look like you are 4 somewhere else. Turn off capslock, and learn facts.

Democrats gave Bush a chance when he was the worst president in our history. We waited till his policies kicked in, THEN we voiced our opinions.


You are just judging instantly -__- immature much? MY CANDIDATE DIDNT WIN. I SO SAD!! D:< IMMA RIP ON OTHA PREZ CAUSE THEN I CAN BE KOOL STILL!!!