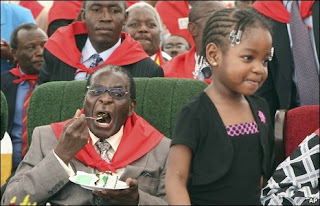 MUGABE IS "THE ONE" OF ZIMBABWE, THE MAN WHO EMBODIED CHANGE; "SOCIAL AND ECONOMIC JUSTICE".

HERE' WHAT IT GET'S YOU . . . THIS: Lavish Mugabe birthday party amid crisis

Zimbabwean President Robert Mugabe is celebrating his 85th birthday today with a huge party for thousands of guests.

Supporters are said to have raised 200,000 dollars to stage the event in the president's native village....

Critics have voiced outrage at the party, which comes as Zimbabwe battles severe food shortages, hyperinflation, mass unemployment, collapsing health and education services and a cholera outbreak that has claimed nearly 4,000 people in six months.

ENGINEERING "SOCIAL AND ECONOMIC JUSTICE" IS THE ROAD TO POVERTY AND SERVITUDE TO GOVERNMENT, IOW: SERFDOM.