AMERICA IS WISING UP ABOUT OBAMA AND A BACKLASH IS BUILDING 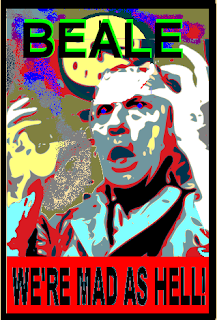 One month and Obama is a DISASTER: the markets are tanking BECAUSE of his socialistic policies; our enemies are kicking us BECAUSE of his appeasement makes us look weak, and his cabinet is a joke.

The good thing is: because Obama has been so awful more people are beginning to see that the Emperor has no clothes.

Obama's approval rating stands at 67 percent in the new poll. That's down 9 percentage points from the most recent CNN poll, which was conducted in early February.

And the backlash is building.

When the traders standing around Santelli spontaneously erupted and shared their antipathy for Obama's policies it wasn't the reaction of an elite. It was the eruption from the masses. It was a HOWARD BEALE MOMENT!

The fact that the youtube of this exchange was the most popular thing emailed and viewed online yesterday proves this.

People are sick and tired of the OBAMA BS.

We're mad as hell and we're not gonna take it anymore!

Posted by Reliapundit at 6:13 PM

I agree. Obama may end up leaving office in disgrace before his term is ended.