WITH HIS TRILLION DOLLAR PORKAPALOOZA, OBAMA HAS SCREWED HIMSELF - BIGTIME 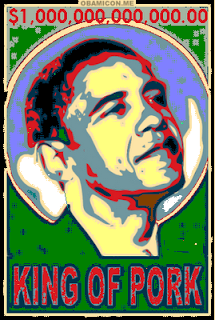 Obama has screwed himself BIGTIME.

The "stimulus" package is loaded with useless crap which won't help the economy - and people know it.

But even worse stuff is gonna come out about this porkapalooza; Ben Stein:

I love this. The new kind of politics of hope. Eight hours of debate in the HR to pass a bill spending $820 billion, or roughly $102 billion per hour of debate.

Close to half goes to entities that sponsor or employ or both members of the Service Employees International Union, federal, state, and municipal employee unions, or other Democrat-controlled unions.

This bill is sent to Congress after Obama has been in office for seven days.

According to my calculations, not one member of Congress read the entire bill before this vote.

Obviously, it would have been impossible, given his schedule, for President Obama to have read the entire bill.

For the amount spent we could have given every unemployed person in the United States roughly $75,000.

We could give every person who had lost a job and is now passing through long-term unemployment of six months or longer roughly $300,000.

If the economy starts to recover before 2010 - which in all likelihood will happen - then Obama CANNOT take or get credit for the recovery.

And as the crony payoffs embodied in the bill become more widely known - as they inevitably will be, it will expose Obama for what he truly is: A CORRUPT CREATURE OF THE MACHINE.

The GOP will reap HUGE rewards for having NOT voted for the porkapalooza, and will in all likelihood retake the House and Senate on 2010.

All because of Obama.

The only thing which can save Obama is if he VETOES the stimulus package and says he's doing so because there's too much pork in it.

The odds of that are less than the odds Obama will covert to Judaism.

There's usually a reaction to every action in American politics, and while the Democrats and Obama have basically a free hand to expand government in the current environment, you can already feel the backlash building.

UPDATE #2: MORE CRITICISM OF THE BILL HERE.
Posted by Reliapundit at 6:51 PM

Are you taking into consideration the machinations of the Dept. of the Mainstream Media?

i think that there is a fair chance that some on the msm will go after obama.

they have turned on nearly every pres in the past.

but the pork in this is truly breathtaking.

because the bill sucks bigtime.

the corrupt scum running the house went hogwild and it's so so so SO bad that there's gonna be no denying how awful it is.

obama has cooked his own goose in the first week of his presidency.

Obama is a great president. His presence is impacting grants like no other president prior. Grant funding for minorities and middle class have increased nearly 10,000% in the past week.