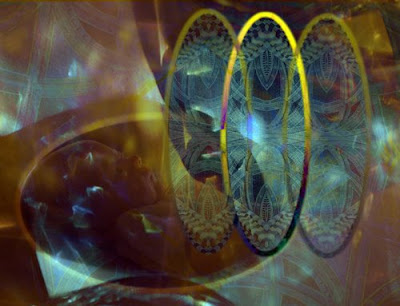 Tao Te Ching
A new theory proposed by Physicists says that the Universe may be a hologram, projected into three-dimensional space, from a flat two-dimensional surface.
From the New Scientist:

DRIVING through the countryside south of Hanover, it would be easy to miss the GEO600 experiment. From the outside, it doesn't look much: in the corner of a field stands an assortment of boxy temporary buildings, from which two long trenches emerge, at a right angle to each other, covered with corrugated iron. Underneath the metal sheets, however, lies a detector that stretches for 600 metres.

For the past seven years, this German set-up has been looking for gravitational waves - ripples in space-time thrown off by super-dense astronomical objects such as neutron stars and black holes. GEO600 has not detected any gravitational waves so far, but it might inadvertently have made the most important discovery in physics for half a century.

For many months, the GEO600 team-members had been scratching their heads over inexplicable noise that is plaguing their giant detector. Then, out of the blue, a researcher approached them with an explanation. In fact, he had even predicted the noise before he knew they were detecting it. According to Craig Hogan, a physicist at the Fermilab particle physics lab in Batavia, Illinois, GEO600 has stumbled upon the fundamental limit of space-time - the point where space-time stops behaving like the smooth continuum Einstein described and instead dissolves into "grains", just as a newspaper photograph dissolves into dots as you zoom in. "It looks like GEO600 is being buffeted by the microscopic quantum convulsions of space-time," says Hogan.

If this doesn't blow your socks off, then Hogan, who has just been appointeddirector of Fermilab's Center for Particle Astrophysics, has an even bigger shock in store: "If the GEO600 result is what I suspect it is, then we are all living in a giant cosmic hologram."

The idea that we live in a hologram probably sounds absurd, but it is a natural extension of our best understanding of black holes, and something with a pretty firm theoretical footing. It has also been surprisingly helpful for physicists wrestling with theories of how the universe works at its most fundamental level.

The holograms you find on credit cards and banknotes are etched on two-dimensional plastic films. When light bounces off them, it recreates the appearance of a 3D image. In the 1990s physicists Leonard Susskind and Nobel prizewinner Gerard 't Hooft suggested that the same principle might apply to the universe as a whole. Our everyday experience might itself be a holographic projection of physical processes that take place on a distant, 2D surface.

The "holographic principle" challenges our sensibilities. It seems hard to believe that you woke up, brushed your teeth and are reading this article because of something happening on the boundary of the universe. No one knows what it would mean for us if we really do live in a hologram, yet theorists have good reasons to believe that many aspects of the holographic principle are true.

Susskind and 't Hooft's remarkable idea was motivated by ground-breaking work on black holes by Jacob Bekenstein of the Hebrew University of Jerusalem in Israel and Stephen Hawking at the University of Cambridge. In the mid-1970s, Hawking showed that black holes are in fact not entirely "black" but instead slowly emit radiation, which causes them to evaporate and eventually disappear. This poses a puzzle, because Hawking radiation does not convey any information about the interior of a black hole. When the black hole has gone, all the information about the star that collapsed to form the black hole has vanished, which contradicts the widely affirmed principle that information cannot be destroyed. This is known as the black hole information paradox.

Bekenstein's work provided an important clue in resolving the paradox. He discovered that a black hole's entropy - which is synonymous with its information content - is proportional to the surface area of its event horizon. This is the theoretical surface that cloaks the black hole and marks the point of no return for infalling matter or light. Theorists have since shown that microscopic quantum ripples at the event horizon can encode the information inside the black hole, so there is no mysterious information loss as the black hole evaporates.

Crucially, this provides a deep physical insight: the 3D information about a precursor star can be completely encoded in the 2D horizon of the subsequent black hole - not unlike the 3D image of an object being encoded in a 2D hologram.

Read the whole thing.
Posted by Pastorius at 4:04 PM

this is a load of NONSENSE.

Why do you say that?

IT'S AN ANALOGY OF AN ANALOGY BASED ON DATA WHICH MIGHT BE ARTIFACTS OF THE DATA COLLECTORS.

According to Craig Hogan, a physicist at the Fermilab particle physics lab in Batavia, Illinois, GEO600 has stumbled upon the fundamental limit of space-time - the point where space-time stops behaving like the smooth continuum Einstein described and instead dissolves into "grains", just as a newspaper photograph dissolves into dots as you zoom in.

The holograms you find on credit cards and banknotes are etched on two-dimensional plastic films. When light bounces off them, it recreates the appearance of a 3D image.

ER UM... WHEN I ACCIDENTALLY BITE MY TONGUE I DON'T HAVE A RECREATED EXPERIENCE OF PAIN; I FEEL IT. AS I FEEL HEAT AND COLD - AND LOVE AND HATE. THESE ARE NOT HOLOGRAMMATICAL EXPERIENCES. THEY ARE NOT ILLUSORY.

REMEMBER: ALL THIS COSMOLOGY CRAP FOLKS LIKE HAWKING ET ALL SPEW OUT IS TOTALLY PROVISIONAL, AND USEFUL ONLY UNTIL SOME OTHER CONTRAPTION WE BUILD FINDS NEW DATA WHICH CONTRADICTS IT.

BESIDE: THE 2D INFO MIGHT BE ENCODED ON THE EVENT HGORIZON ONLY AFTER THE ITEMS COLLAPSED INTO THE BLACK-HOLE COLLAPSE; IOW: ONLY THEN IS IT 2D AND CAPTURED, LIKE A RECORDING.

THERE'S NO BASIS FOR ARGUING IT PRE-EXISTS ON A 2D PLANE AND OUR 3D EXISTENCE MERELY A PROJECTION OF IT.

E8 EXPLAINS MORE AND IT DOES SO MORE SIMPLY AND ELEGANTLY.

EVERYTHING THAT DOES EXIST EXISTS IN MORE THAN 4 DIMENSIONS SIMULTANEOUSLY BUT MUCH OF MATTER MAY ONLY BE EXPRESSED IN 4 DIMENSIONS SOME OF THE TIME.

FOLKS HAVE GOT TO STOP THINKING ABOUT SPACE AS EMPTY AND THE OBJECTS IN IT AS DISCONNECTED.

SPACE IS FILLED TO THE BRIM AND EVERYTHING IN IT CONNECTED.

SCIENTISTS LIKE HOGAN ARE DESPERATELY TRYING TO PROP UP THEORIES FROM THE LAST 20 YEARS.

ALL WILL FADE AWAY.

AND I THINK THIS HOLOGRAM THEORY IS SOCIOPATHIC. A SORT OF 4 DIMENSIONAL POSTMODERNIST ATTACK ON LIFE:

THEY SEEM TO BE SAYING, "NOT ONLY IS TRUTH RELATIVE; YOU ARE AN ILLUSION."

I TELL YOU WHAT'S AN ILLUSION:

THE BELIEF THAT THESE PHYSICISTS KNOW WHAT THE FUCK THEY ARE TALKING ABOUT.

EINSTEIN WAS RIGHT. NOT THESE TURKEYS.

Reliapundit,
You said: THEY SEEM TO BE SAYING, "NOT ONLY IS TRUTH RELATIVE; YOU ARE AN ILLUSION."

I say: No, they are saying that three-dimensional space is encoded in two-dimensions, just like it says it the Bible.

You are misreading it.


You said: BESIDE: THE 2D INFO MIGHT BE ENCODED ON THE EVENT HGORIZON ONLY AFTER THE ITEMS COLLAPSED INTO THE BLACK-HOLE COLLAPSE; IOW: ONLY THEN IS IT 2D AND CAPTURED, LIKE A RECORDING.

I say: Yes, it is true that that could be, but that is not the beginning of the theory, they only used that as corroboration by showing that their theory also explained another problem in theoretical physics.

All semantic explanations of quantum physical phenomena are analogies. None of them are accurate. They are word models of things that occur beyond our vision.

I don't necessarily believe any of these ideas. I just think they are interesting.