Why they hate Sarah 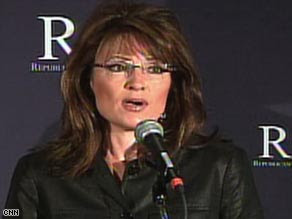 If it is generational change the electorate wants, some American conservatives are pinning their hopes on Sarah Palin. Unlike the recent crop of successful conservative leaders around the world, Palin is a bonfire lighter. She sparks a visceral hatred among her ideological opponents, more malign and more extreme than was the case even for Hillary Clinton, the previously most vilified politician since Margaret Thatcher. Note they are all women.

While race may no longer be an issue in post-partisan times, sexism is alive and well, but perpetrated most nakedly by the Aunty Alices of the media firmament. These are women who seek to ingratiate themselves with the dominant power group, even if it means trashing their own kind. They are to women what Uncle Tom was to black people.

And why? Mostly because of abortion, because as the American political analyst Michael Barone said this week, Palin did not abort her disabled baby. Barone later claimed he was joking, after being booed by journalists during a speech in Chicago when he reportedly said: "The liberal media attacked Sarah Palin because she did not abort her Down syndrome baby. They wanted her to kill that child." Palin represents so radical a disruption of the cultural order that she just has to be smashed. The amount of mud being thrown at her now is a measure of how seriously the threat of a Palin presidential campaign in 2012 is taken.

Posted by John Ray. For a daily critique of Leftist activities, see DISSECTING LEFTISM. For a daily survey of Australian politics, see AUSTRALIAN POLITICS Also, don't forget your daily roundup of pro-environment but anti-Greenie news and commentary at GREENIE WATCH . Email me (John Ray) here
Posted by JR at 8:06 AM