THE GOP MUST WIN OVER URBAN AMERICA TO BECOME THE MAJORITY PARTY - AND HERE'S HOW...


Obama carried the cities by more than Kerry and this is why he won.

Some of this is due to voter fraud and some due to concentrations of students indoctrinated by left-wing dominated colleges professors.

Some of it is due to vestigial voting patterns and still strong urban machines and coalitions.

BUT MOST OF IT IS DUE TO THE FACT THAT OUR CITIES HAVE BEEN DEMOCRAT MACHINE STRONGHOLDS FOR DECADES AND DECADES.

Many of our largest cities are one-party towns in which the GOP has trouble fielding a real GOP candidate at all - like my hometown, NYC. We have elected a few GOP mayors: Lindsay - who was a liberal and a DISASTER, and Rudy and Mike Bloomberg. All liberal on the social issues. Rudy was a great mayor - he saved the city, and Bloomberg became a Republican in order to run and win on Rudy's GOP accomplishments.

The GOP needs to replicate and solidify Rudy's success, an to do this the GOP needs to refine and communicate an aggressive URBAN AGENDA which reflects conservative principles and policies - policies which would improve our cities and the GOP nationally.

I first wrote about this RIGHT AFTER THE 2004 ELECTION - and NOTHING was done about it, and that's why the GOP lost in 2008. Here's what I wrote:

Message to the ascendant GOP: ASSERT AN URBAN AGENDA

Looking over the electoral map (by county) one cannot help but make at least one huge conclusion: the Democrats are still the majority party most of the big old cities - most majorities are HUGE.

WHAT ARE THE REASONS FOR THIS?

All this is changing, but not enough. Clinton moved more toward the center and toward the GOP when he pledged "to end welfare as we know it." This helped Clinton at the polls.

The GOP must make bigger and better overt overtures to the urban electorate, and it can do this merely by asserting its inclusive, color-blind, pro-business, anti-crime, personal empowerment (anti-welfare/anti-state dependency), school choice/teacher accountability, and low tax URBAN agenda.

This effort should be led by former mayors Giuliani and Riordan, and Senators Coleman and Lugar - both former mayors, and Mayor Bloomberg.

This newly assertive GOP Urban Agenda would help the cities, and just as importantly - it would be the death knell for the Left.
Permalink - Posted by Reliapundit @ 1:45 PM

AN URBAN AGENDA FOR THE NEW MILLENIUM

Polipundit linked to a great map of the elections results; this one is in NOT merely by color (red versus blue), but also has a "3D" effect which amplifies the fact that the Left-wing Democrat Party is really NOT a national party, but ONLY the majority party of America's biggest cities. This fact is further buttressed by a poll in today's NYTIMES by Edison Media Research; this poll revealed that the Democrat Party got 60% of the votes cast in cities with over 500,000 people - the ONLY size city or town that they carried!

This map (and this tally in this poll) indicates not just where the Democrats ARE NOW, but where the GOP must take the fight over the next few years if we are to finally eradicate the failed politics and policies of the Left-wing.

We must take the fight to the cities - and we can do this by merely articulating AN URBAN AGENDA FOR THE NEW MILLENNIUM which is based on the core principles of the GOP: empowerment, opportunity, and ownership.

(1-a) Push for school choice and school vouchers. These empower parents and dis-empower the teacher's unions (and other unions - like custodians and principals) which are bleeding school budgets without improving the academic results.

(1 -b) We should also make all school systems accountable to mayors - not school boards - so that there is political accountability for results. We do this by making federal aid to schools conditional on these two changes.

(2) Privatize public housing. This uplifts the working poor and makes them independent stakeholders, instead of people dependent on the state. Jack Kemp floated this idea 20 years ago; it's time to dust it off and implement it - perhaps by bringing him back as HUD Secretary! We need to ramp up low cost loans for this purpose and dispatch co-op advisers and incentivize local general contractors to undertake much needed improvements to these newly privately held assets.

(3) Incentivize economic activity by cutting taxes on new businesses in the cities - and make this a federal/state/local partnership by making the federal portion of tax incentives dependent on equal participation of the state and the city. This would be a twist on revenue sharing; this would be "tax-cut sharing." This would incentivize the states and cities to "buy into" supply-side economics (which have been proven to work).


BOTTOM-LINE: BLUE cities all have higher unemployment, and lower high school graduation rates, and more crime than RED counties. This is in part due to several decades of failing Left-wing policies foisted on the the cities by the Democrat machines merely to get votes.

The aggressive 3-point GOP program for the cities will end the decline of the cities, improve the lives of city-dwellers, and end the Left-wing Democrat Party's cynical and demagogic stranglehold on the cities.
That's a win-win-win for everyone.
Permalink - Posted by Reliapundit

I STAND BY EVERY WORD AND I CALL UPON THE NEXT GOP CHAIRMAN TO ADDRESS THESE ISSUES AND CREATE A GOP URBAN AGENDA - PERHAPS EVEN APPOINTING A DEPUTY CHAIR FOR URBAN AFFAIRS.

THE AGENDA WOULD NOT ONLY REINVIGORATE THE GOP, IT WOULD SAVE THE CITIES.

AFTER ALL THIS IS ANOTHER WAY TO READ THE 2008 ELECTION MAP: 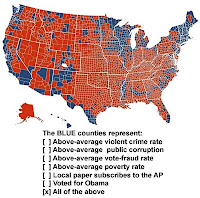 THE CITIES ARE WALLOWING IN A LIBERAL WASTELAND OF FAILED LIBERAL POLICIES.

IT'S TIME TO LIBERATE THE CITIES FROM THE FAILED POLICIES OF THE PAST.

IT'S TIME TO LIBERATE CITY-FOLK FROM THE CORRUPT DEMOCRAT URBAN MACHINES WHICH USE THESE POLICES TO MAINTAIN THEIR OWN POWER AT THE EXPENSE OF LIBERATING THE CITIZENS THEY'RE SUPPOSED TO SERVE.


AND IT'S TIME TO DO THIS NOW.

IT'S UP TO NEWT AND/OR MICHAEL STEELE.

THERE'S EVERYTHING TO GAIN, AND NOTHING TO LOSE.

NEWT, MICHAEL: THE BALL IS IN YOUR COURT.
Posted by Reliapundit at 8:09 PM

But I note that Obama has plans to make sure that businesses which fled to the suburbs return to the inner city. How is he going to force that to happen? Your thoughts?

WE DON'T NEED TO LURE BUSINESSES FROM ONE PLACE TO ANOTHER.

AND WE NEED TO GET CONTROL OF URBAN SCHOOLS AWAYS FROM POLITICIANS AND UNIONS.

WE DO THIS BY GIVING PARENTS VOUCHERS.

A PROACTIVE CONSERVATIVE URBAN AGENDA IS BEST. WE NEED TO POSUH IT. ALL THE URBAN/OBAMA COUNTIES ARE CRAP. WOTH CONSERVATIVE POLICIES WE CAN SAVE THEM AND WIN THEM OVER.

OBAMA HAS TO STICK UP FOR HIS UNIONS. AND THE URBAN MACHINES.

SO HIS POLICIES HAVE TO SERVE THEM AND NOT THE PEOPLE, AND THAT'S WHY CONSERVATIVES CAN WIN OVER THE CITIES.