A small compendium of skeptical comment on the bailout

Comment by Steven E. Landsburg, professor of economics at the University of Rochester in Rochester, New York: "We are embarking on the most radical transformation of the American economy since the New Deal, committing hundreds of billions in taxpayer money to save banks and other financial institutions from the consequences of their own bad investments. This, we are told, is the cost of averting a crisis. But I sure wish someone would explain to me exactly what crisis we're trying to avert. What's clear is that a bunch of financial institutions have made mistakes and lost money. What's unclear is why anyone (other than the owners and managers) should care. People make mistakes and lose money all the time. Restaurants fail, grocery stores fail, gas stations fail. People pick the wrong stocks, they buy the wrong cars, and they marry the wrong spouses without turning to the Treasury for bailouts. 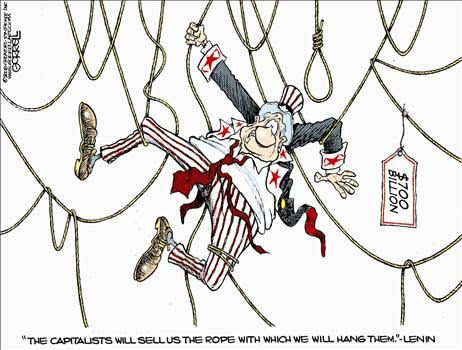 Bailout marks Karl Marx's comeback : "In his Communist Manifesto, published in 1848, Karl Marx proposed 10 measures to be implemented after the proletariat takes power, with the aim of centralizing all instruments of production in the hands of the state. Proposal Number Five was to bring about the `centralization of credit in the banks of the state, by means of a national bank with state capital and an exclusive monopoly.' If he were to rise from the dead today, Marx might be delighted to discover that most economists and financial commentators, including many who claim to favor the free market, agree with him."

Why I oppose the bailout, by US Rep. Mike Pence (R-IN): "Economic freedom means the freedom to succeed and the freedom to fail. The decision to give the federal government the ability to nationalize almost every bad mortgage in America interrupts this basic truth of our free market economy. Republicans improved this bill but it remains the largest corporate bailout in American history, forever changes the relationship between government and the financial sector, and passes the cost along to the American people. I cannot support it."

A damn good defeat: "There is no disputing that financial firms have too much unidentified and unpriced, semi-performing assets on their books. To regain access to the credit and capital markets, all these firms have to do is identify and price those assets. The resulting write-downs will trim the share price and capital will once again flow in. It's that simple, kind of. You see, these firms don't just want access to the capital markets again, they want it at the share price they can command with those overvalued assets on their books. Hey, I want $30K for my `92 Accord with 200k miles on it, too, but I'm not holding my breath. The Billionaire Bailout scheme, in a round-about fashion, is to force you to take on these overvalued assets at book value or, in most cases, higher thus replacing ??? with cash on the books of financial firms. When the scheme fell apart this afternoon, the stock market resumed its one-and-only function: discovering the share price at which firms can access capital markets."

Economic laws of conservation: "One of the economic broad principles that I am familiar with is that, while the market can be wrong, you (whoever you are) are almost certainly unable reliably to do better than the market. Claims that the government will probably recoup its investment and even profit violate this principle. Another of the economic broad principles that I am familiar with is that the market works by no other means than rewarding wise investment and punishing foolish investment. That is how it works. A more general broad principle, upon which this relies, is that you get more of what you reward. The bailout violates this principle as well. Miron, and other economists who have spoken out against the bailout, have tended to make arguments that I find comprehensible and persuasive, because they appeal to broad economic principles that I am familiar with and have long since accepted. Those who have spoken out in favor of the bailout - well, for one thing, rather than see actual arguments from them I have seen appeals to authority, appeals to hidden knowledge, sky-is-falling warnings that have no actual content but serve merely to shift the reader into panic mode, vehement attacks on those who disagree, and the like".

If you're going to bailout anybody... : "It is not clear whether there would be a financial catastrophe if the bailout were not passed. Credit is still available; millions of people are still using their credit cards. Businesses are still getting loans. However, it is true that many firms can't obtain funds except at quite high risk premiums, or not at all. The credit markets are somewhat stuck, but maybe that is because lenders are waiting for the government to act. Any plan that bails out banks and mortgages is going to favor some at the expense of others. Many who have been dutifully paying their mortgage payments, or fully own their homes, will not get any aid. If there is a major liquidity problem, and if government has to step in to prevent financial chaos, the egalitarian solution would be to provide money to everyone equally. Money to the people!"

Posted by John Ray. For a daily critique of Leftist activities, see DISSECTING LEFTISM. For a daily survey of Australian politics, see AUSTRALIAN POLITICS Also, don't forget your roundup of Obama news and commentary at OBAMA WATCH (2). Email me (John Ray) here
Posted by JR at 8:26 AM