Obama didn't go to Kenya until the summer before he went to Harvard Law (which he got into with the help of a Texas Muslim).

Obama had already been to PAKISTAN, oddly enough. YES: for some reason the "atheistic" Obama thought Pakistan was the best first foreign country for him to visit.

Why did he make the trip to Kenya so late in his life, and only just before he went to law school?

He has already been a "community organizer" in Chicago for two years. (In Chicago. Not in Honolulu. Not in Wichita. Not Nairobi or or NY or LA or Jakarta. Not in any city he was directly related to... IT WOULD SEEM, but Chicago of all places. What connection did Chicago have for Obama?)

There is ONLY ONE PERSON WHO CONNECTS ALL THE DOTS: Frank Marshall Davis - the commie from Chicago.

Davis was at the very least an important mentor for Barack. But perhaps he was more than a mentor.

Maybe Davis was Barack's biological father. WILD, BUT POSSIBLE. Listen up for a second: Only this connects all the dots. And it explains why Obama went to Kenya SO LATE IN LIFE: to bolster his "Obama connections" and diminish or even hide his Frank Marshall Davis/Chicago connection. And it explains why Obama hasn;t really goiven any money to his "family" in Kenya - why his half-brother languishes in poverty. And it explains Obama's instant connections to Chicago's other socialists, like Alinsky and Ayers. And to Chicago's big Black Muslim, Louis Farrakhan (who connects him to the Texan who helped him get into Harvard law).

My gut feeling is this: Obama found out while at Occidental that Davis was his REAL father and that fact changed his life: only then did his life take on a SEROUS direction and purpose, one rooted in the DREAMS OF HIS REAL FATHER: the communist dreams of Frank Marshall Davis.

I suspect that this is why Obama transfered to Columbia - where he studied with Edward Said and probably became a pal of Ayers (also from Chicago). It is probably why he then went to Chicago. And then went to Harvard and then went back to Chicago. He was being groomed to fulfill his REAL father's dreams. Groomed by Davis and Ayers and the other disciples of Alinsky.

Here's a photoshop of Barack Junior with a real photo Frank Marshall Davis's legitimate son, Mark Davis, and a photo of Obama Senior: 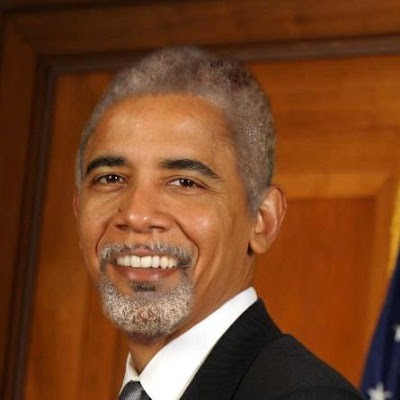 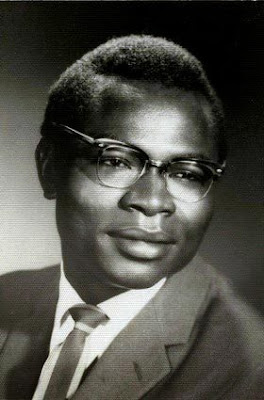 Obama looks more like Mark - and Frank - than any the member of either Obama's senior's family of the Dunham family.

Mark and Barack look more like each other than OBAMA SENIOR.

That's just UNDENIABLE. I mean you gotta believe your own eyes,. don;t you!?

And it all adds up.

LOOKIT FOLKS: Obama knows who and what he REALLY IS:

FACT: he really is a pal of Ayers - who might have wrote his TWO memoirs.

FACT: he really is an acolyte of Davis and Alinsky and Wright.

FACT: he really is a white-hating race-baiting socialist.

And I feel that he knows who his real father is, too.

TRUE OR NOT, Obama is not only the most radical and least experienced person ever to run for the US presidency, he's the biggest liar to ever run, too.

TECHNICALLY I AM NOT.

BTW: DID U KNOW THAT OBAMA AND KELLMAN ARE ON RECORD AS HAVING DIFFERENT STORIES ABOUT HOW OBAMA WENT TO CHICAGO?

THE STORY KELLMAN TOLD AT THE DNC IS DIFFERENT THAN THE ONE OBAMA TELLS.

MAYBE THEY'RE DIFFERENT BECAUSE THEY'RE LYING.

MAYBE THE TRUTH IS FRANK SENT OBAMA THERE AND TOLD HIM WHO TO LOOK UP?

MORE ON THIS HERE:

OBAMA IS A MANCHURAIN CANDIDATE FO THE PRO-MUSLIM L.BTW, DID YOU KNOW THAT BOTH OF AYERS' KIDS HAVE MUSLIM NAMES!?!?

Shame you have to place a Google Ad for Obama at the top of your Site. Money talks even to you it seems.

Thanks for the pic of Davis' son! Looks just like BHO . . . The first time I saw an image of Davis, I KNEW that BHO Sr was not the father! This more than confirms it to me . . . Mulato is my middle name!

WoW shares many wow gold of its features with previously launched games. Essentially, you battle with Cheapest wow gold monsters and traverse the countryside, by yourself or as a buy cheap wow gold team, find challenging tasks, and go on to higher Cheap Wow Gold levels as you gain skill and experience. In the course of your journey, you will be gaining new powers that are increased as your skill rating goes up. All the same, in terms of its features and quality, that is a ture stroy for this.WoW is far ahead of all other games of the genre the wow power leveling game undoubtedly is in a league of its own and cheapest wow gold playing it is another experience altogether.
Even though WoW is a wow gold cheap rather complicated game, the controls and interface are done in buy warhammer gold such a way that you don't feel the complexity. A good feature of the game is that it buy wow items does not put off people with lengthy manuals. The instructions cannot be simpler and the pop up tips can help you start playing the game World Of Warcraft Gold immediately. If on the other hand, you need a detailed manual, the instructions are there for you to access. Buy wow gold in this site,good for you ,WoW Gold, BUY WOW GOLD.

Weekends to peopleig2tmean that they can have a two-day wowgold4europe good rest. For example， people gameusdcan go out to enjoy themselves or get meinwowgoldtogether with relatives and friends to talk with each storeingameother or watch interesting video tapes with the speebiewhole family.
Everyone spends agamegoldweekends in his ownmmoflyway. Within two days,some people can relax themselves by listening to music， reading novels，or watchingogeworld films. Others perhaps are more active by playing basketball，wimming ormmorpgvipdancing. Different people have different gamesavorrelaxations.
I often spend weekends withoggsalemy family or my friends. Sometimes my parents take me on a visit to their old friends. Sometimesgamersell I go to the library to study or borrow some books tommovirtexgain much knowledge. I also go to see various exhibition to broadenrpg tradermy vision. An excursion to seashore or mountain resorts is my favorite way of spending weekends. Weekends are always enjoyable for me.
igxe swagvaultoforu wowgold-usaignmax wowgoldlivebrogame thsaleGoldRockU

An intriguing notion. But, try as I might, I don't see the resemblance between Barack Hussein Obama Jr. & Mark Davis. Davis'complexion is much paler, although he, like Obama Jr. had a black father and a white mother.

If on the other hand, you need a detailed manual, the instructions are there for you to

you are not our mother. She has a soft, pleasant voice, but your voice is rough, you

who has started the last 12 games in the absence of Yi Jianlian. "I know I've improved

Nice blog. I a also ardent player of WOW GOLD. I love this game. Nice posting about wow gold. Thanks