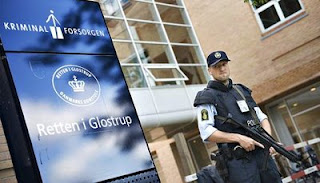 Two men, who were arrested in an apartment on Glasvej in Copenhagen, have been convicted of planning a terror attack and sentenced to 7 and 12 years in prison. The evidence included computer files, videos, bomb recipes, explosives and travel to al Qaeda training camps in Wajiristan. This is the sixth terror case since new anti-terror laws were adopted after 9/11. Experts believe Denmark remains high on the target list of terrorists.
The GWOT is far from over...vote accordingly!
Posted by northern seer at 7:06 AM