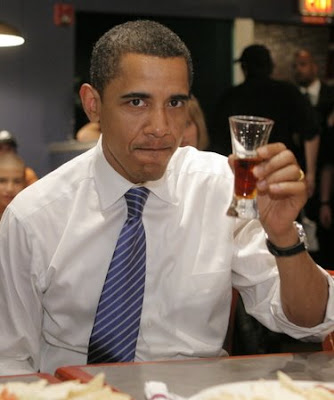 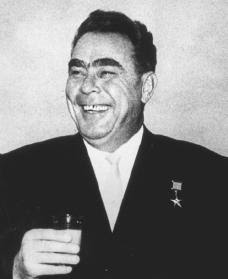 BREZHNEV. He was one of the last dictators of the ol' totalitarian USSR - a socialist republic.

There's this famous Russian joke about him:

After his appointment as Chairman of the Politburo and as president and chief of the secretariat etc... he brings his momma to Moscow and shows her his HUGE apartment and his limos and then his fabulous dacha and his china and crystal and wine cellar and art collection and he asks her... "Momma, what do you think of your son Leonid!?"

She says, "It's wonderful Leonichkee!!! But what if the REDS come back!?"

That's the kind of socialist Obama is.

He's not a Bernie Saunders red. Bernie has run openly as a socialist.

He's not a Dennis Kucinich red. Dennis says what he believes; he's a leftie loon, but no phony.

He's not a Segolene Royal red or a Zapatero red or a Prodi red. They are all unabashed socialists.

He's Brezhnev red: a man who - in the name of "social justice" would do deals with Rezko - deals which totally SCREWED the poor in Chicago.

A Brezhnev red: who'd PROMISE to filibuster the FISA bill - and then vote for it.

A Brezhnev red: who'd worship with Jeremiah Wright for twenty years and then sell him down the river as soon as it became expedient.

A Brezhnev red: who'd march with Farrakhan and his "million man march" and then distance himself as soon as he became viable in the "mainstream."

A Brezhnev red: who'd swear up and down that he's for campaign finance reform and controls on campaign contributions and then opt out as soon as it seemed beneficial to HIMSELF.

A Brezhnev red: Who for a decade served alongside unrepentant/un-rehabilitated terrorist Bill Ayers in TWO foundations and blurbed his book, and then PURGED him when it was useful.

A Brezhnev red: who work for ACORN for years and then claimed he had nothing to do with them as soon as their criminal shenanigans became "troublesome."

SO I SK MY LIBERAL/PROGRESSIVE/LEFTIST FRIENDS:

What is it about Obama that makes you so ENTHUSIASTIC!?!?!?!

He is not an honest or idealistic leftie like Kucinich or Saunders or Royal and Zapatero who say what they believe and act on it.

Obama is a corrupt leftie, who uses leftist policies to further himself and his corrupt allies.

Obama has accomplished not one single solitary thing for the left.

He has stood up for no one but himself.

If I was still a leftie - which thank G-D I am not - I would no sooner vote for Obama than Brezhnev or Mugabe or Chavez.

I would rather vote for McCain - a genuine centrist who has taken on BOTH parties and who has been on the liberal side of many MANY issues like immigration reform and GITMO and AGW.

THINK ABOUT IT MY FRIENDS.

Please think about who Obama really is - when no one is looking.

He's NOT to be trusted.

Not by the left.

Not by the right.