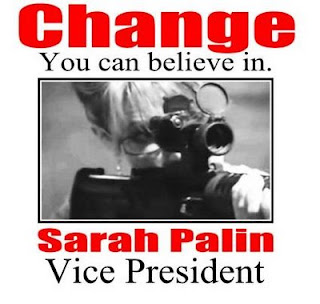 Yesterday I admonished Rick Brookhiser as "obtuse" for his outrageous assertion that conservatives like Governor Palin because of her identity just as the Democrats adore Senator Obama because of his melanin quotient:

What Brookhiser just doesn't get is that loving her baby and handling an M-16 are things that Governor Palin does, not demographic characteristics that she happens to have.

There is a world of difference between the enthusiasm about the reality quite evident in the history of her actions, on the one hand, and Obama's claim that he deserves coronation because of his demographic attributes.

And that difference is one of the reasons that Senator McCain's choice was so right. He is way ahead of the conservative pundits on this one, too.

I don't often disagree with Peter, but there is nothing elegant about Rick's assertion that "Conservatives love Palin because she has a Downs baby and an M-16." It's offensive.

It's also flat wrong. Rick's assessment is offered as an analogy to liberal love for Obama as "Numinous Negro." The comparison doesn't come close to the mark. The so-called "numinous Negro" is a story's hero figure for no better reason than complexion. His or her assumed wisdom is the treacly projection of collective, indelible liberal guilt over the dark slavery and segregation chapters in American history; beyond color, we know nothing about the character.

The contrast to Sarah Palin couldn't be more stark. Even if the only things we knew about her really were that she'd rejected the option of aborting her baby and owned guns, those would be concrete indicia of a conservative American life actually lived.

This is a real person: living through the crises and enjoyments that people and families go through, and making choices that tell us a great deal about who she is. It happens that the two facts Rick chooses to highlight provide very advantageous political contrasts to Obama, who has labored to protect a right of infanticide, and the Democrat ticket, which is hopelessly Second Amendment-challenged. But for purposes of Rick's snarky analogy, that's quite beside the point. No one is asking you to assume Palin is wise due to something so irrelevant to wisdom as the color of her skin. You can make a reliable judgment about who she is, though, by the choices she has made when confronted by life's highs and lows.

Thank you, Andrew, for making the point so well.

And for making this one:

Now I could be wrong, but I don't think Rick ever uttered the suggestion that Sen. McCain might be thought unserious about the war when McCain pushed his amendment giving Fifth Amendment rights to captured alien terrorists (during a war in which intelligence gleaned from interrogations is urgently needed); or when McCain pushed to close Guantanamo Bay, which has been an intelligence coup; or when McCain implied that President Bush's warrantless surveillance program — the penetration of enemy communications which has always been a staple of war-fighting — was illegal.

The possibility of unseriousness was not raised until McCain named as a running mate a woman who's instilled in the son she raised a love of country that induced him to enlist voluntarily in the United States Army on the sixth anniversary of the 9/11 attacks. This September 11th, he'll be deployed to Iraq to fight the war we are winning despite Barack Obama's best efforts to force a pull-out that would have given victory to al Qaeda.

No wonder the conservative base is enthusiastic!

And let me add that this choice underscores Senator McCain's boldness, confidence, and judgment. He's just the President we need to out-fox America's foreign opponents. As he on Friday thoroughly out-foxed some of America's domestic ones.

(Order bumperstickers etc with the picture above here. Hat tip: Gateway.)
Posted by Punditarian at 11:39 AM

Wow, that was exactly what I've been trying to put into words myself. Only beginning the second day of Sarah Palin being choosen by John McCain the Liberal Media has pounced on her with full fury. She's been critized and torn apart and hardly anyone even knows who she is.

And Yes, the fact that she supports America, and lives a decent life is a good reason to learn more about Palin and see how real Americans live life.

I really think that the Liberals are afraid of her, Palin did come out strong on her acceptance speech, struck right to the bone and was very classy. Strength of Character and good decision making skills, Palin will be a good leader.

Obama on the other hand always seems to be following a script, nothing about him is unique. Obama has been associated with some the creepiest people in politics, religion and cultural life.

McCain has to continue to do what he is doing, being himself and setting the path for a shake up in government and not get bogged down in the shadow of a 3rd Bush Administration label.

I love President Bush, but I do think that he should have stood up to Congress more about domestic issues (oil drilling offshore, and school choice).

"Obama has been associated with some the creepiest people in politics, religion and cultural life."

And you're right about President Bush failing to defend his policies and strike hard at the left.