From the Chicago Sun-Times article on grants distributed by then-state-legislator Barack Obama.
(Records from 1997 to 2000 weren’t available.)
There’s a shock.

His state legislative office records may have been thrown out, he told us. 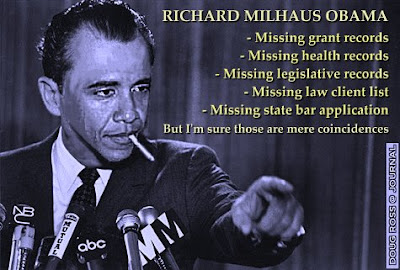 He’s never released a specific list of law clients, instead giving a list of all of his firm’s clients, numbering several hundred each year. His campaign will only confirm representation when the media comes to them with a specific case.

He won’t release his application to the state bar. He’s never released any legal or billing records to verify that he only did a few hours of work for a nonprofit tied to Tony Rezko.

He’s never released any medical records, just a one-page letter from his doctor.

Barack Obama seems to have a lot more in common with Richard Nixon than simply running to the center during the general campaign.
Posted by directorblue at 7:29 PM