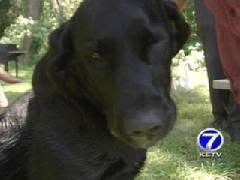 KETV in Omaha featured an impressive story about a 4-year-old Labrador Retriever who saved a 12-year-old boy from drowning in the Platte River near North Bend:

He was only a few feet away from the shore, but the river current was strong enough that it was pulling him down and under. He said his cries for help weren't being heard by anyone, except Jake, the 4-year-old Lab. "I was saying, 'Help, help,' and I saw him jump in, and then my head went under, and when I came up, he was right here by me," Tony said. Tony said the dog swam out next to him and he grabbed the dog's neck. The dog swam back to shore with the boy in tow.

But here's where it gets interesting, from the epistemological point of view, anyway. The boy's family was surprised that the dog came through:

"It's something that I wouldn't have expected him to do -- to have the brains to do, I guess," said Tony's mother, Diane.

Sometimes he can act real hyper and weird," said Tony. "He'll pick up rocks and think they're balls and wants you to throw them to him."

He was just smart enough on Friday. "You think you know your dog so well, but then he does something like this," said Diane Bailey. "He's got a big heart and he does have a brain in there."

The family thought their dog wasn't smart because "he doesn't mind." They judged his enthusiasm as "hyper."

So too for so many of us; we judge a dog's intelligence by his willingness to obey our instructions. We think that doing what we say indicates understanding, and failing to comply indicates dullness.

We often define intelligence as the willing performance of a rote task.

But Jake, in this instance, showed real intelligence. He showed problem-solving ability. He showed the ability to understand a situation with which he had in all likelihood never been confronted before, and he was able to decide, on his own just what to do.

That is real intelligence.
Just like the difference between being able to read mellifluous oratory from a teleprompter screen, and being able to answer questions and handle debate on your feet.

And Jake the Labrador showed real courage, and character, too.

Those qualities should be pretty easy to identify, don't you think?
Posted by Punditarian at 9:30 PM