HOW WE GOT HERE: IN JUNE 2001, BUSH PROPOSED AN AGGRESSIVE ENERGY PRODUCTION PLAN WHICH THE DEMS DEFEATED 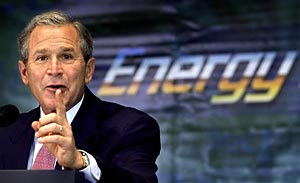 In May [2001], convinced the nation was terrified of going California and hungering for a steak-and-eggs energy plan, Bush sold his plan as an aggressive drill-and-dig, anti-regulatory prescription to shoo away the tree-huggers and get the nation — and the economy — humming again.

Two months later, a New York Times/CBS poll released last week found that not only do two-thirds of the nation think Bush and Cheney are too beholden to oil companies, 60 percent think the pair made the whole energy crisis up.

we haven't seen high energy prices yet. learn about peak oil. in 20 years, you will be lucky to afford the gas to drive a car. check out cheney's energy advisor matthew simmons and republican house member roscoe bartlett (bartlett.house.gov) and get ready for the end of the growth economy in our lifetime if we don't change direction immediately. as much as i wish it were, this is not a left/right issue. the cheap half of the oil is out of the ground and now we are going for the hard ($$$) to get stuff. energy independence in the face of peak oil is a fantasy no matter what we do. gasoline is presently $22 a gallon without subsidies and soon we shall realize that oil is a finite resource, a one time gift that took millions of years to create and we are squandering it in two centuries on soft living. how much oil will we leave for our grandkids? not much at this rate. and when fossil fuels phase out this century watch the population of this planet plummet. without fossil fuels to allow us to temporally extend this planet's carrying capacity during the industrial revolution, it is doubtful the world would have ever surpassed one billion people. google republican matthew simmons and check it our yourself.

Gasoline is definitely not $22 dollars a gallon without subsidies, but it is significantly higher than what we have been paying, probably more like $6 - $8. However, Randall is right to bring up peak oil. It is a finite resource.

I think the point you're missing in your own post is that the whole drilling thing has almost no impact on gas prices. In the areas that have been open to drilling, very little has been done anyway. It should also be pointed out that taxpayers pick up the cost burden from the routine oil spills associated with offshore drilling. That is not a liberal argument, that is looking at the statistics for Texas and Louisiana.

The "pro-drilling" argument is paid-for by oil companies trying to acquire more land at virtually no cost. The Government basically gives them property in exchange for them to say they will increase production, which few of them actually do. This is part of the reason so many of them were angry that land immediately on the beach in many states is not accessible - they can profit from increased tax breaks by pretending to do more "oil research." It is a gimmick just like the "gas tax holiday," it allows oil companies to capitalize on ailing taxpayers and oil consumers: They keep their prices the same and their supply costs go down, but everyone thinks the government is doing something to help.

In your post, you frame this entire thing as if liberal Democrats are all part of some conspiracy to keep us from resources. Your views on regulation are completely misguided.

By what regulations are American oil companies bound? Oil companies, in reality, face very little regulation at all, if any. In fact, they have close ties to administration officials. You don't even understand the scenario - it isn't like there are a bunch of tree-huggers trying to stop oil drilling. In case you aren't aware, there aren't many trees in the ocean. Seriously though, this is not an environmentalist thing to oppose aggressive drill and dig... it's a fiscally responsible argument. You can't advocate spending taxpayer money on handouts to the wealthiest companies on earth. It's absurd. You are not a true conservative if you believe in that.

The worst part is, only the Mineral Management Service is saying we have oil in those parts anyway. They're saying "enough oil to run 50 million cars for 20 years" or something. That ignores the fact that there are well over 200 million cars in America, and that the oil would need to be pumped out, a process that could take 20 years to even begin happening. Most experts expect a drop of about 1-5 cents per gallon over the course of 20 years. When you consider inflation, that is not a significant break.

You are blaming 8 liberal Republicans and all the Democrats for this crisis. You should be aware that there are plenty of conservative Democrats also. Furthermore, Republicans had control for YEARS. They did NOT have any kind of miracle solution.

Poor economic planning from the executive branch is partly to blame for all of this, along with the market reality that we are just beginning to run out of oil - and that money going to benefit oil companies *that you would advocate* should be going to alternative fuel research so we can continue into the next decade on top.