The Lorain County, Ohio, judge who recently ordered that the State stop using the most widely used three-drug cocktail for euthanizing condemned criminals is proud to display a poster of a mass-murderer who without any trial at all personally executed his victims with a bullet to the head.

Ohio's lethal injection process is unconstitutional because it could cause pain and the state mandates that an inmate's death be painless, Lorain County Common Pleas Judge James Burge ruled Tuesday.

He ordered the Ohio Department of Rehabilitation and Correction to stop using the drugs that paralyze muscles and stop the heart and simply administer a lethal dose of an anesthetic. 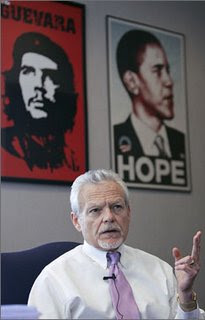 Here's a photograph of Judge James M. Burge in his chambers:

Here's how, as described in a well-documented article by Humberto Fontova, Judge Burge's hero, Ernesto "Che" Guevara disposed of his enemies:

Under Che, 's La Cabana fortress was converted into 's Lubianka. He was a true Chekist: "Always interrogate your prisoners at night," Che commanded his prosecutorial goons, "a man is easier to cow at night, his mental resistance is always lower." [1]

A Cuban prosecutor of the time who quickly defected in horror and disgust named Jose Vilasuso estimates that Che signed 400 death warrants the first few months of his command in La Cabana. A Basque priest named Iaki de Aspiazu, who was often on hand to perform confessions and last rites, says Che personally ordered 700 executions by firing squad during the period. Cuban journalist Luis Ortega, who knew Che as early as 1954, writes in his book Yo Soy El Che! that Guevara sent 1,897 men to the firing squad.

In his book Che Guevara: A Biography, Daniel James writes that Che himself admitted to ordering "several thousand" executions during the first year of the Castro regime. Felix Rodriguez, the Cuban-American CIA operative who helped track him down in Bolivia and was the last person to question him, says that Che during his final talk, admitted to "a couple thousand" executions. But he shrugged them off as all being of "imperialist spies and CIA agents."

Alvaro Vargas Llosa described Che in an article in the New Republic as a "killing machine:"

Guevara might have been enamored of his own death, but he was much more enamored of other people’s deaths. In April 1967, speaking from experience, he summed up his homicidal idea of justice in his “Message to the Tricontinental”: “hatred as an element of struggle; unbending hatred for the enemy, which pushes a human being beyond his natural limitations, making him into an effective, violent, selective, and cold-blooded killing machine.” His earlier writings are also peppered with this rhetorical and ideological violence. Although his former girlfriend Chichina Ferreyra doubts that the original version of the diaries of his motorcycle trip contains the observation that “I feel my nostrils dilate savoring the acrid smell of gunpowder and blood of the enemy,” Guevara did share with Granado at that very young age this exclamation: “Revolution without firing a shot? You’re crazy.” At other times the young bohemian seemed unable to distinguish between the levity of death as a spectacle and the tragedy of a revolution’s victims. In a letter to his mother in 1954, written in Guatemala, where he witnessed the overthrow of the revolutionary government of Jacobo Arbenz, he wrote: “It was all a lot of fun, what with the bombs, speeches, and other distractions to break the monotony I was living in.”

Guevara’s disposition when he traveled with Castro from Mexico to Cuba aboard the Granma is captured in a phrase in a letter to his wife that he penned on January 28, 1957, not long after disembarking, which was published in her book Ernesto: A Memoir of Che Guevara in Sierra Maestra: “Here in the Cuban jungle, alive and bloodthirsty.” This mentality had been reinforced by his conviction that Arbenz had lost power because he had failed to execute his potential enemies. An earlier letter to his former girlfriend Tita Infante had observed that “if there had been some executions, the government would have maintained the capacity to return the blows.” It is hardly a surprise that during the armed struggle against Batista, and then after the triumphant entry into Havana, Guevara murdered or oversaw the executions in summary trials of scores of people—proven enemies, suspected enemies, and those who happened to be in the wrong place at the wrong time.

In January 1957, as his diary from the Sierra Maestra indicates, Guevara shot Eutimio Guerra because he suspected him of passing on information: “I ended the problem with a .32 caliber pistol, in the right side of his brain.... His belongings were now mine.” Later he shot Aristidio, a peasant who expressed the desire to leave whenever the rebels moved on. While he wondered whether this particular victim “was really guilty enough to deserve death,” he had no qualms about ordering the death of Echevarría, a brother of one of his comrades, because of unspecified crimes: “He had to pay the price.” At other times he would simulate executions without carrying them out, as a method of psychological torture.

Luis Guardia and Pedro Corzo, two researchers in Florida who are working on a documentary about Guevara, have obtained the testimony of Jaime Costa Vázquez, a former commander in the revolutionary army known as “El Catalán,” who maintains that many of the executions attributed to Ramiro Valdés, a future interior minister of Cuba, were Guevara’s direct responsibility, because Valdés was under his orders in the mountains. “If in doubt, kill him” were Che’s instructions. On the eve of victory, according to Costa, Che ordered the execution of a couple dozen people in Santa Clara, in central Cuba, where his column had gone as part of a final assault on the island. Some of them were shot in a hotel, as Marcelo Fernándes-Zayas, another former revolutionary who later became a journalist, has written—adding that among those executed, known as casquitos, were peasants who had joined the army simply to escape unemployment.

This is the man whom Judge Burge so admires, that he placards his image in his Chambers, the Chambers where he does the people's business, and exercises his functions as judge and magistrate of the State of Ohio.

What could be more disgusting than that?
Judge Burge, it may not surprise you to learn, was elected to the Lorain County Court of Common Pleas as a candidate of the Democratic Party. A graduate of Kent State University, he taught school before taking a law degree at Cleveland State University. He was a criminal defense lawyer and a co-chairman of the White Collar Crime Committee of the National Association of Criminal Defense Lawyers.

He described himself in his campaign materials this way:

I offer my academic credentials, my training and my experience in the practice of law as my campaign platform. I have spent thirty years trying both civil and criminal cases in the Common Pleas Court of Lorain County and in other courts around the state. I have tried cases successfully and also unsuccessfully, and I have learned and matured from each experience, both on a personal and professional level.

Here's hoping that the good voters of Lorain County will desire a change, and return to the private life he so richly deserves, this admirer of a man who murdered thousands without compunction.

I have no comment on the other poster in Judge Burge's Chambers. I think that by decorating his official Chambers with a partisan campaign poster, he may be trespassing the limits of ethical judicial behavior. But perhaps in Lorain County they do things the Chicago way.
Posted by Punditarian at 11:55 AM