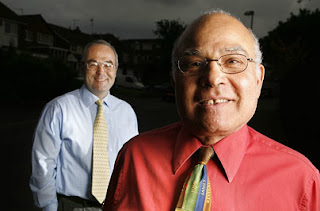 As reported by the Telegraph, two Christian evangelists in Birmingham, England, a country whose established, government-supported religion is the Church of England, of which the reigning Queen is the Supreme Governor, were ordered to cease proclaiming the Gospel by a British police officer:

The evangelists say they were threatened with arrest for committing a "hate crime" and were told they risked being beaten up if they returned. The incident will fuel fears that "no-go areas" for Christians are emerging in British towns and cities, as the Rt Rev Michael Nazir-Ali, the Bishop of Rochester, claimed in The Sunday Telegraph this year.

Mr Abraham said: "I couldn't believe this was happening in Britain. The Bishop of Rochester was criticised by the Church of England recently when he said there were no-go areas in Britain but he was right; there are certainly no-go areas for Christians who want to share the gospel.

The British police no longer believe in Christianity, of course, they believe in post-modern multi-culturalism:

The preachers, both ministers in Birmingham, were handing out leaflets on Alum Rock Road in February when they started talking to four Asian youths.

A police community support officer (PCSO) interrupted the conversation and began questioning the ministers about their beliefs.

They said when the officer realised they were American, although both have lived in Britain for many years, he launched a tirade against President Bush and the wars in Iraq and Afghanistan.

Mr Cunningham said: "I told him that this had nothing to do with the gospel we were preaching but he became very aggressive.

"He said we were in a Muslim area and were not allowed to spread our Christian message. He said we were committing a hate crime by telling the youths to leave Islam and said that he was going to take us to the police station."

The British police have therefore become an enforcement arm for jihadi extremists and Islamists who wish to impose shari'a law on all of Great Britain. By enforcing the shari'a ban on Christian evangelism, the police have become instruments for demonstrating Muslim supremacy -- in Britain.

As Mark Steyn observed last week, it is "strange to witness one of the oldest and most successful of nations commit suicide without even being aware of what it's doing."

It would be interesting to learn more about Mr. Joseph Abraham. From his picture, he looks as if he might be an Indian, perhaps from the state of Kerala, where seven Christian churches were established by St. Thomas even before the destruction of the Second Temple in Jerusalem.

Posted by Punditarian at 9:41 PM

It's not just England, it's most of, if not ALL of Europe, they are being over-run by the Muslims hordes and haven't got the whereto to take care of business if you get my drift...

And if Obama gets elected, we're next, he has promised to disarm the American public, and that's going to be quite a chore, but should he prevail this will no longer be a nation of citizens, it will be a nation of SUBJECTS that have submitted to the PURE EVIL that IS Obama...